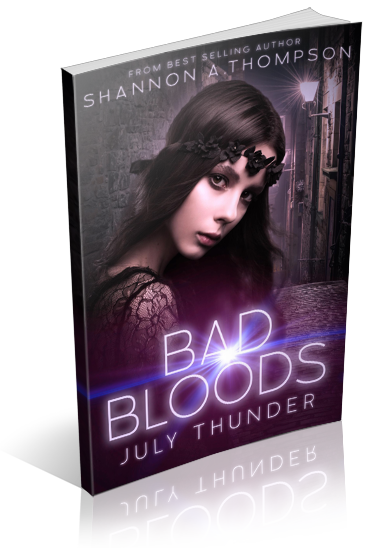 From best-selling author Shannon A. Thompson comes an exciting new duology in the Bad Bloods universe.

Fourteen-year-old Violet has been called many things: a bad blood, a survivor, an immortal…now she has a new name—citizen. But adjusting to a lawful life is not easy, especially when she must live under the rule of the same officers who justified the killings of her flock only eight months earlier.

Segregation of bad bloods and humans is still in effect, and rebellious Violet steps into a school where she is not allowed. When the police get involved, things deteriorate quickly, sparking a new revolution at the wall separating the Highlands from the outskirts.

That’s when Caleb steps in. He might appear to be an average sixteen-year-old bad blood, but he has secrets, and Violet is determined to figure them out. Caleb knows who’s attacking the wall and why, but his true identity remains a mystery—and how he relates to Violet could shake the threatened city to its very core.

Together or not, a storm will form, a rally will start, and shocking truths will be revealed.

I am organizing a release week blitz for July Thunder by Shannon A. Thompson, a YA Fantasy novel. The blitz will run from April 10th to April 16th, 2017, you can post on any day during this window. There will be excerpts available for your post, and every participant will be able to post the blitz-wide giveaway if you wish – giveaway prize(s) courtesy of publisher. Social media sites are welcome.

An email with the complete post info including promo items and giveaway details will be sent to all participants on April 6th.
HTML will also be provided.