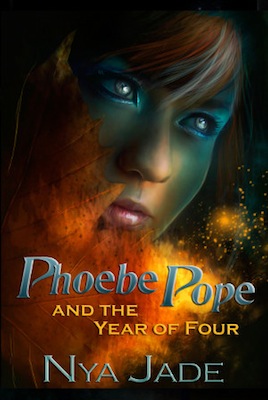 Cover art done by Phatpuppy Art.
Where to purchase  Phoebe Pope and the Year of Four:
Amazon 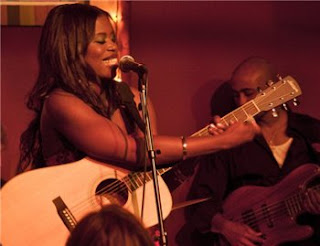 Nya Jade is a singer-songwriter and author based in San Francisco. Her music videos have aired on the VH1, BET, and MTV networks. USA Today hailed Nya as a “young female troubadour worth keeping your eyes and ears on,” in an entertainment feature on up-and-coming singer-songwriters. “Her cool singing voice recalls Sade,” said the LA Times.

Between writing and performing new music, Nya took a musical sabbatical to focus on writing a novel—an endeavor she found quite daunting, until she began looking at each chapter as a verse in a very long song. Phoebe Pope and the Year of Four is her first novel.

In her free time, Nya enjoys hanging out with family and friends, searching for amazing gluten-free desserts, and bargain hunting for her next pair of funky shoes.

Nya holds a B.A. in Economics and an M.A. in Sociology, both from Stanford University.

The Promo Blitz:
I am organizing a promotional blitz for YA Paranormal, Phoebe Pope and the Year of Four by Nya Jade, which will take place on Friday, December 7th, 2012. The promo blitz post will consist of the book and author info, purchase link, an excerpt, and a giveaway (optional). The giveaway is for a Kindle Fire HD, every participant will receive the Rafflecopter code which will have an entry to follow your blog.
Sign ups are now closed!
The Tour:

2 Responses to “Tour: Phoebe Pope and the Year of Four by Nya Jade”