Kenssie is a demon who feeds from secrets. Lately pickings have been slim, and she has grown so weak that her shield of invisibility is slipping. As the servant of a demon who eats embarrassment she already feels like she’s the laughing stock of the demonic world. But the scorn of someone who thinks the Hawaiian shirts are the height of cool is the least of her worries.

A powerful fear demon is dead set on making her his slave, a position that carries seriously short life expectancy.

She has no friends.

Her only hope of escaping a life of terror lies in stealing a grimoire she’s never seen from the clutches of a vindictive group of master demons. 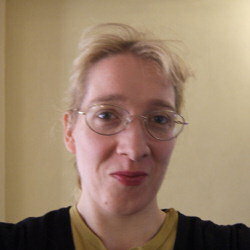 Rock singer, xenobiologist and ninja are just some of the jobs Ros wishes she could put on her CV. She has been a book blogger for over a decade, and has done a wide range of different jobs whilst dreaming of the written word. She lives in Lincolnshire under the iron rule of a grumpy black cat.

The Cover Reveal:
I am organizing a cover reveal for The Secret Eater by Ros Jackson, her upcoming YA Urban Fantasy Adventure novella designed by Rick Parsons. The cover reveal is scheduled for Tuesday, April 2nd, 2013 (after 12:01AM EST).

An email with the posting information will be sent to all participants on March 29th.

One Response to “Cover Reveal Sign Up: The Secret Eater by Ros Jackson”