“A lighthearted, whimsical confection that will delight both kids and their parents’ inner child.” – Kirkus Reviews

How far will you go to find your way home?

Emma and her father are always on the move, travelling from place to place as her father’s work demands. Their new home, however, is different. There’s a frightening woman who lives down the hall: she bears an uncanny resemblance to a witch. A mysterious light comes from her apartment, and a small boy seems to be trapped inside.

School in this town is no happy place either, with an odd principal and a gang of girls who make tormenting Emma their special project. And strangest of all is the fact that there seem to be brownies – basement brownies, in the air vent in her bedroom.

Haunted by visions of her mother, Emma travels through the brownie burrow to the valley of Hades to visit with the goddess Ceres, following a series of clues that lead her across the sea of memory to the centre of the world.

There, on an inhospitable rock floating in a sea of steaming lava, Emma must find a way to release her mother from the sea of memory and restore magic to both the brownie burrow and the human world above. 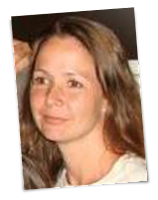 Tanya Karen Gough was born in Montreal, Quebec and raised in New England, where she developed a healthy appetite for ghosts and things that go bump in the night. An avid reader from a young age, she quickly worked her way through Alice in Wonderland, the Magical Monarch of Mo, Andrew Lang’s Fairy Books, all of the Tintin comic books, Nancy Drew, and most of the other books in the children’s library.

Finally, at the tender age of 10, she produced this poetic masterpiece:

To date, she has moved more than 25 times. Along the way, she earned two degrees in English Literature, taught overseas, became the owner operator of the Poor Yorick Shakespeare Catalogue, and contributed to a number of Shakespeare-related publications. Root Bound is the first of four books in the Emma and the Elementals series.