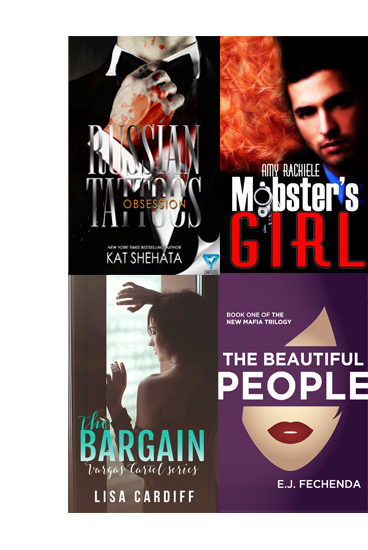 Competitive tennis player Carter Cook wants a taste of freedom. Her overprotective father monitors every aspect of her life, so when he becomes employed by Vladimir Ivanov—a sexy Russian with an array of tattoos and an accent that weakens her knees—a bit of danger is within Carter’s grasp. Behind her father’s back, she enjoys spending time with Vladimir at his lavish estate. But is he really the upstanding businessman she believes him to be? [Read more…]

That’s all it took to derail my life and twist it into something unrecognizable. One moment I had Evan, the man I thought I’d marry. The next moment shattered the illusion.

Now I have no one.

Except him. [Read more…]

The Beautiful People by E.J. Fechenda
Natalie Ross has always gone to her brother for help. Grant’s been her rock throughout their turbulent childhood. Knowing she’s struggling financially, he gets her a job at Crimson, one of the hottest nightclubs in Philadelphia where he works as head of security. Natalie promises Grant she won’t get sucked into the party scene or involved with any of her co-workers because she’s focused on finishing her last semester of college. Her promise doesn’t last 24-hours once she meets Dominic. [Read more…]

Mobster’s Girl by Amy Rachiele
Gripping my chest is the only way to hold myself together or what’s left of me will fall out. The past week has enlightened me on one thing-I don’t care.
Megan, Mobster’s Girl

I didn’t even hesitate. I took two strides and blasted him in the face with my fist. He was ready for it this time-unlike in church. He tried to hit me back but I ducked and smashed him again.
Antonio, Mobster’s Girl [Read more…]

I am organizing a Mafia Takeover Book Blitz, featuring 4 mafia novels. The blitz will run from January 25th to January 29th, you can post on any day during this window. There will be excerpts available for your post, and every participant will be able to post the blitz giveaway (incl. signed book & more) if you wish. Giveaway prizes courtesy of authors.

An email with the complete post info including promo items and giveaway details will be sent to all participants on January 21st.
HTML will also be provided.