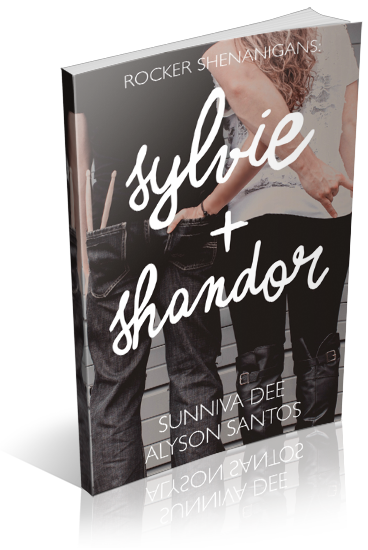 They rock hard, play hard, and live life freaking hard. So when it comes to love it’s no surprise they screw up just as hard. Join an amusing cast of characters from Sunniva Dee’s and Alyson Santos’ rock star novels as they meet and pursue each other amidst the backstage chaos of their world.

Rocker Shenanigans is a romantic comedy series of novellas that will toss you into the fun, sexy, and hilarious side of rocker life.

Rocker Shenanigans I:
Sylvie Drake is ecstatic when her rock-goddess sister invites her to a charity event in the Bahamas. With a lineup featuring legends like Night Shifts Black, Clown Irruption, and Tracing Holland, how could this weekend not be totally epic?

Smoldering gaze, cocky smile, and passionate hands that dominate a guitar. Everything about this mysterious stranger screams out-of-her-league.

Shandor Xodyar is here to work. And keep his fiery cousin out of trouble with the threat of former flames breathing down their necks. What he didn’t count on is a three-word bombshell disrupting his mission:

Then again, some ignored warnings are worth the consequences.

I am organizing a release day blitz for Rocker Shenanigans: Sylvie + Shandor by Sunniva Dee & Alyson Santos, an 18+ Romantic Comedy novella. The blitz is on December 19th, you can post at any time on this day. There will be excerpts available for your post, and every participant will be able to post the blitz-wide giveaway if you wish – giveaway prize(s) courtesy of authors. Social media sites are welcome.