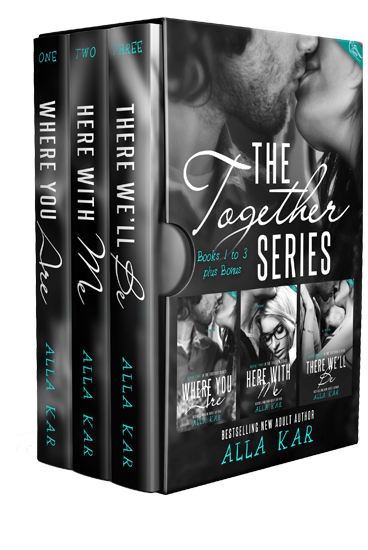 Book 1 – WHERE YOU ARE by Alla Kar
Got boy problems? Call Laney Scott. She’s good for advice, a shoulder, or a swift kick where you need it. When her roommate Bethany gets her heart broken by Aiden, yet again, it’s Laney to the rescue. But Laney’s harboring a secret. She’s nursing her own broken heart. But, she and her friends come up with a plan to break Aiden, and set it into play. Laney wants Aiden to pay for what he’s done to Bethany. She will make him fall in love with her, so she can break his heart.

Laney’s ex-boyfriend Lachlan Hems is back in Florida, still Australian and sexy as hell. His best mate Lucas is getting married, and he is in town for the show. He just didn’t realize Laney would be there … in another guy’s arms, or that seeing her again would have such an effect on him. After the incident in high school, he vowed to never care for her again. But sometimes, fate has different plans.

When Laney’s resolve crumbles, Lachlan is the only one who can put her back together again.

Book 2 – HERE WITH ME by Alla Kar
Jaden Baker is stoked about college, making new friends, and erasing the memory of being bullied in high school. But moving on comes with a price. Her dad has made arrangements for her to move into her brother’s apartment so he can keep an eye on her. But there’s a glitch in her dad’s plans. There are also two other college boys living in the apartment too. Suddenly, living in an off-campus apartment with three college-aged boys seems like a bad idea — but not to Jaden. After all, Cade is pretty damn hot, making the whole forced living arrangement and brother-as-a-baby-sitter a little more tolerable.

Cade Jenkins grew up on the opposite side of the tracks from his best-friend and his privileged little sister. His dad bailed when he was a kid, and he can’t help but still care for his drug-addicted mother. This semester, things are looking up. He’s met someone. Too bad she’s his best-friend’s fresh out of high-school, inexperienced little sister. Awkward!

Just when it looks like things might be changing for the better, Jaden finds herself battling severe depression and a broken heart as old feelings re-emergence after that high school bully targets her again. Cade, who’d love to pick up the pieces and make her whole, must fight his own demons and brewing family trouble just to hold on.

If only they didn’t find themselves falling irrevocably in love.

Book 3 – THERE WE’LL BE by Alla Kar
Respect your elders. Stay off Sawyer property. And don’t even think about that Sawyer girl…

Boone Cross was raised with three simple rules, and falling for Josie Sawyer broke every one of them. That is, until a year ago, when he ​did the unthinkable and she moved away.

Josie Sawyer never thought she’d be on a plane, flying back to Arkansas for the summer, only a year after her heart was crushed into a thousand pieces by the boy her parents forbade her to love. But ​her father is dying, and being stubborn isn’t an option.

In a town this small, it’s only a matter of time before she runs into Boone Cross.
A lot’s changed since she last laid eyes on him, but some things have remained exactly the same. Boone’s got designs on her and he won’t give up until he gets what he wants.

​But as they give in to the need to be together once more, ​secrets ​come to light ​revealing​ a ​history of a hatred between their families that runs ​so ​deep that even the strongest love may not be able to survive.

BONUS eBOOK – REDEMPTION by Alla Kar
REDEMPTION is the story of an ex-con with a second chance who falls for a girl who just might be too good to be true.

I am organizing a book blitz for The Together Series Boxset by Alla Kar, a New Adult Romance boxed set from Swoon Romance. The blitz is on May 5th, you can post at any time on this day. There will be excerpts available for your post, and every participant will be able to post the blitz-wide giveaway if you wish – giveaway prize(s) courtesy of publisher. Social media sites are welcome.