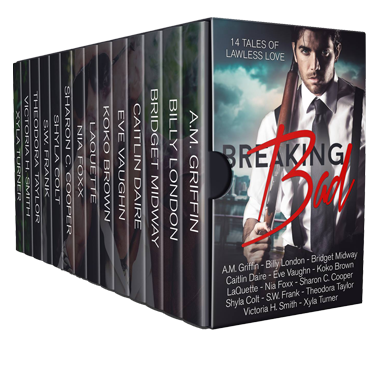 Nice guys finish first, said no one ever. But we guarantee you’ll finish this collection filled with dark and dangerous alphas who obey no one, play by their own rules, and least of all allow anything to come between them and what they desire most. You’ll never look at thieves, hit men, bounty hunters or ex-cons the same way again. Break bad and our sexy-as-sin bad boys will steal your heart.

NOTE: These bad boys and girls may break hearts, but you’re guaranteed a happily ever after in every tale! No cliffhangers!

His to Possess by Theodora Taylor
What ruthless mafia prince Luca Ferraro wants, Luca Ferraro gets. And he won’t stop until he possess the daughter of his family’s biggest enemy. In. Every. Single. Way.

Star-Crossed by Koko Brown
Some people are born bad…again and again, and again

His Favorite by Eve Vaughn
With one taste, an addiction is born.

Notorious by Caitlin Daire
He says he’s not guilty, but he might be the death of me anyway…

Sleeping With The Enemy by LaQuette
When sleeping with the enemy, hate becomes their addiction, and love… a complicated distraction they can’t afford.

Indebted by Sharon C. Cooper
Even when he does good, he’s bad.

Bad Things, Good Killers by S.W.Frank
He thought he buried the past; but one woman won’t rest until he’s paid the debt for his sins.

Dangerously Theirs by A.M. Griffin
She thinks she can outsmart the law, but can she outrun the bounty hunters who want to claim more than the reward for her capture?

Hideout by Billy London
Rae can hide from everyone out for her blood but she can’t escape what she’s done.

Drive Her by Bridget Midway
There’s no honor among thieves and con artists, and no rest for the wicked, but can there be love?

His for the Taking by Nia K. Foxx
When the lines are blurred it’s hard to distinguish between the good, bad and predators.

Debt Collector’s Due by Shyla Colt
He’ll collect what he’s owed at any cost.

Rectified by Xyla Turner
His lifestyle wasn’t fit for a queen and only one dead man stood between them.

I am organizing a release week blitz for the Breaking Bad: 14 Tales of Lawless Love boxed set. The blitz will run from July 1st to July 6th, 2017, you can post on any day during this window. There will be excerpts available for your post, and every participant will be able to post the blitz-wide giveaway if you wish – giveaway prize courtesy of authors. Social media sites are welcome.

An email with the complete post info including promo items and giveaway details will be sent to all participants on June 27th.
HTML will also be provided.