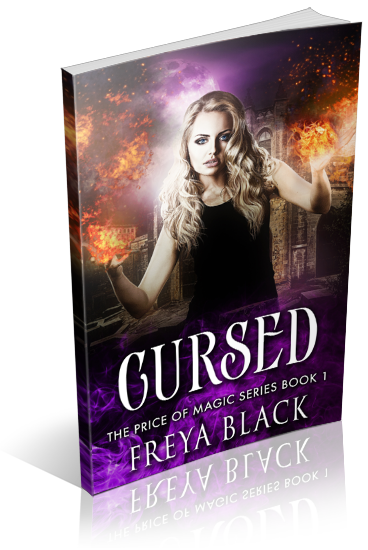 Born of the rare and powerful Crescent bloodline, Fiona Mandrake is no ordinary witch. Because of her ability to divine the future, Fiona has visions of dark Fey who started a war between the realms that killed her parents. Fiona’s visions foretell the deaths of her coven and the destruction of the human world. But the war is not over.

Through clues her mother left behind, Fiona discovers that the Council responsible for magic is corrupt and working with the dark Fey. She seeks the help of her coven and Sloane Blackwell, a Telepath who can see her visions and change her emotions with a single touch. They share a telepathic bond, one that brings them closer.

Sloane’s unique abilities and his link to the Fey aid Fiona in her quest to end the war between the realms. But magic comes with a price. To save her town from destruction, Fiona and Sloane have to defy the Council, using magic that breaks an ancient law punishable by death. With the Council after them and dark Fey on the loose, Fiona and Sloane have to work together to extinguish the dark Fey before it’s too late.

Cursed is the first book in The Price of Magic urban fantasy series.

I am organizing a release week blitz for Cursed by Freya Black, a Upper YA/NA Urban Fantasy novel. The blitz will run from June 14th to June 16th, 2017, you can post on any day during this window. There will be excerpts and teasers available for your post, and every participant will be able to post the blitz-wide giveaway ($10 gift card) if you wish – giveaway prize courtesy of author. Social media sites are welcome.

An email with the complete post info including promo items and giveaway details will be sent to all participants on June 12th.
HTML will also be provided.