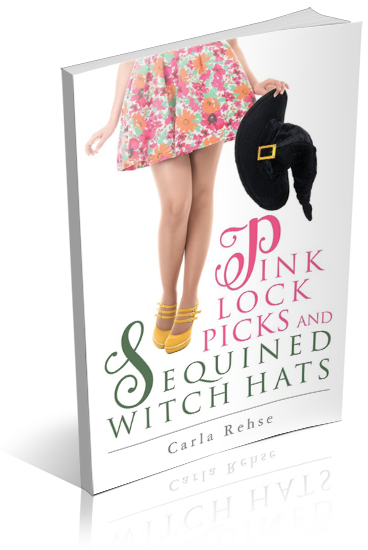 Seventeen-year-old Gracie Mason is homecoming queen, co-captain of the cheerleading squad, and a member of the student council. She’s also a budding burglar. While attempting her inaugural break-in, Gracie blacks out and wakes up far away from the scene. It turns out she accidentally intruded on a male witch’s “circle of power,” and now she’s bonded to him for life. To break the bond, Gracie must delve deeper into a society of witches that involves a secret club, a shadowy council, and all sorts of magical mischief.

Gracie quickly learns that dissolving the bond with Asher, admittedly a very handsome and charming witch, is more complicated than she initially thought. And right when it seems things can’t get any worse, witches start turning up dead. It’s clear that Gracie is out of her depth as her quest to sever the bond magically turns into a murder investigation.

I am organizing a release week blitz for Pink Lock Picks and Sequined Witch Hats by Carla Rehse, a YA Urban Fantasy novel. The blitz will run from July 24th to July 28th, 2017, you can post on any day during this window. There will be excerpts and guest posts/Q&As available for your post, and every participant will be able to post the blitz-wide giveaway ($50 in gift cards) if you wish – giveaway prizes courtesy of author. Social media sites are welcome.

· Guns & Smoke by A. Smith, Lauren Sevier
· Pressure by Chiquita Dennie
· Moments Like This (From Kona With Love) by Anna Gomez, Kristoffer Polaha
· Scorn of Secrets by B. Truly
· The Jade Talisman by Alanna Mackenzie
· The Devil Duet by C. Hallman, J.L. Beck
· Murder at the Met by E.W. Cooper
· Heart Breaker by Michelle Hercules
· Temptation & Absolution by Marla Holt
· Broken Wing by Kathleen Mare'e