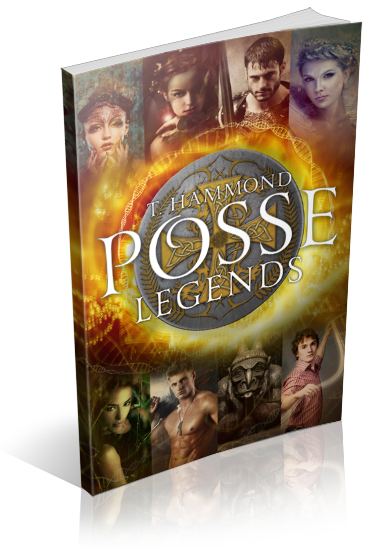 It should have been an easy job.

As leader of the Posse, a paranormal alliance, shapeshifter Lexa O’Clare thought she’d seen everything over the past millennia. Neither she, nor her vampire partner, Etienne, expected this case to be different.

A fugitive werejackal leads them to a secret lab where supernaturals are unwilling subjects in genetic experimentation. The Posse uncovers a conspiracy implicating high-ranking members of the Inter-species Council.

Can anyone’s motives be trusted?

Lexa: a shapeshifter sheriff who also proxies for humans killed before their destinies are fulfilled.
Etienne: a Knight Templar, turned master vampire.
Yasmin: a dragon who walked among the gods.
Jade: an historian & Fox-familiar to a cranky dragon.
Sentinel: a gargoyle who mourns the fall of Atlantis.
Richard: a witch with a target on his back.
Tris: a rare polyshifter with an eye for a sexy male.
Rhys: four months ago he was human…

I am organizing a release day blitz for Posse: Legends by T. Hammond, a YA Urban Fantasy novel. The blitz is on October 26th, you can post at any time on this day. There will be excerpts available for your post, and every participant will be able to post the blitz-wide giveaway if you wish – giveaway prize(s) courtesy of author. Social media sites are welcome.