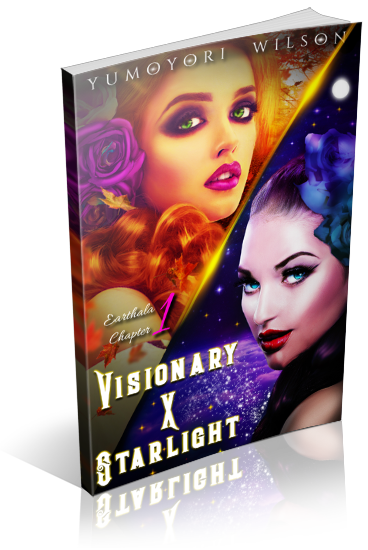 After being held prisoner most of her life, Makoto Heart is now free and currently staying in Realm Five, Minato. So, when her five knights surprise her with a trip to Realm Six, Earthala, she’s beyond excited to see what the hype is all about. Having no interactions with humans, she prays to the Starlight gods that everything goes smoothly – especially with a certain orange haired female and her group of criminal investigators.

Scarlet Sinclair has only had one real friend her entire adult life – which is one more than she had as a child – because no one wants to be friends with the crazy girl who fainted all the time and wore gloves year-round. When she finds out Junho’s friend Marcus is returning to Earthala and bringing with him his friends and one very special blue-eyed brunette, she’s intrigued.

None of them could have ever expected the car chases, mall fights, or sleepwalking adventures that would follow. Makoto and Scarlett are in for an eventful five days as their worlds clash on Earthala soil.

Visionary X Starlight is a FULL-LENGTH mashup of two series and the events that happen in between. Dark Wish – Book One in the Starlight Gods Series AND Visionary Investigator – Book One in Paranormal INC Series must be read to enjoy this series.

I am organizing a release blitz for Visionary X Starlight by Yumoyori Wilson, an Adult Paranormal/Fantasy Romance novel. The blitz will run from January 12th to January 16th, 2018, you can post on any day during this window. There will be excerpts available for your post, and every participant will be able to post the blitz-wide giveaway if you wish – giveaway prize(s) courtesy of author. Social media sites are welcome.