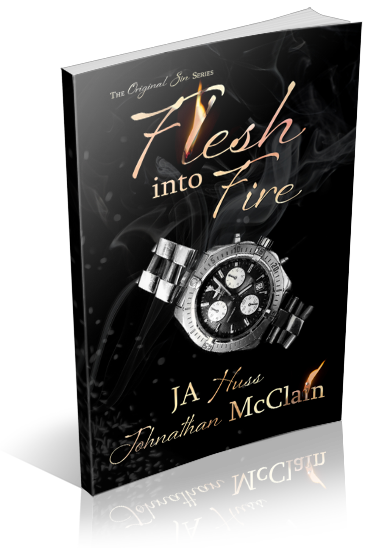 And Maddie Clayton is going to collect. This time Carlos and Logan have gone too far. People are dead, lives have been changed, and she’s had enough. Plus, she’s got the Devil on her side, so when an enemy turns into a friend with an idea of how to take Carlos down, she’s in.

Tyler Morgan has been fighting back his whole adult life. He’s ready for anything when it comes to payback. But endangering Maddie can’t be part of the deal. Unfortunately for him, once Maddie gets an idea in her head, there’s no stopping her.

Her debt has been paid in blood and she wants revenge.
His fight is still there, but now he’s got more at stake than himself.

The end is coming.
But even if they win against Carlos, they can still lose each other.

I am organizing a release week blitz for Flesh Into Fire by JA Huss and Johnathan McClain, an Adult Romantic Suspense novel. The blitz will run from April 16th to April 20th, 2018, you can post on any day during this window. There will be excerpts and teasers available for your post, and every participant will be able to post the blitz-wide giveaway if you wish – giveaway prize(s) courtesy of authors. Social media sites are welcome.

An email with the complete post info including promo items and giveaway details will be sent to all participants on April 13th.
HTML will also be provided.