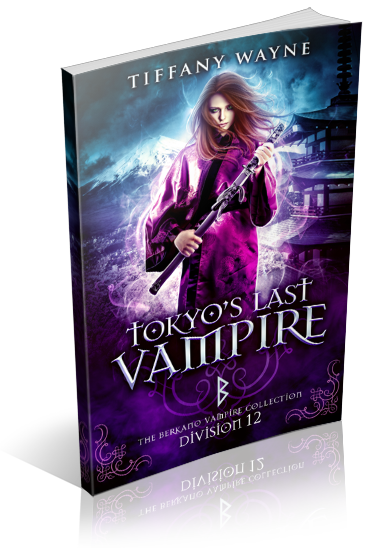 Once upon a time, a witch tried to break the vampire curse for her beloved, a Berkhano vampire. The spell warped the magical fabric of existence and resulted in the Rift. Landmasses split. Some sank into the sea while others rose. The world went from having hundreds of nations to having sixteen divisions walled off from each other by impenetrable dome-like barriers.

Valaria Valentin lives in the remnants of what was once a concrete and glass garden called Tokyo, but is now only known as Division 12. A purge of vampires followed the Rift and Valaria is the last of her kind in all of Japan. Venturing out only at night to hunt for priceless baubles in the radiation zone, Valaria lives a half-life, cut off from the world around her and despising her vampire curse. When Valaria’s one and only friend is kidnapped by the local witches, known as Kami, she is forced out of the darkness of night and into the brightness of day.

Seeking information from the local Yakuza, adversaries of the Kami, Valaria finds herself paired with the leader’s son, an infuriating rogue named Kenshin. As more locals are kidnapped, the pair races to uncover the Kami’s nefarious plans and rescue the missing before it’s too late.

With Kenshin at her side acting as both wise teacher and vexing tormentor, Valaria finds her world more intoxicating and more dangerous than ever before. Forced by Kenshin to confront her human past and her vampire future, Valaria may find herself remade before adventure’s end.

If Kenshin doesn’t kill her first.

And if she doesn’t kill him.

Tokyo’s Last Vampire is a standalone contribution to The Berkano Vampire collection. Stories can be read in any order. To learn more, visit FallenSorcery.com

You can now request a review copy of Tokyo’s Last Vampire by Tiffany Wayne, a YA Paranormal Romance. Reviews should be posted by May 30th. Review copies are available in all ebook formats.