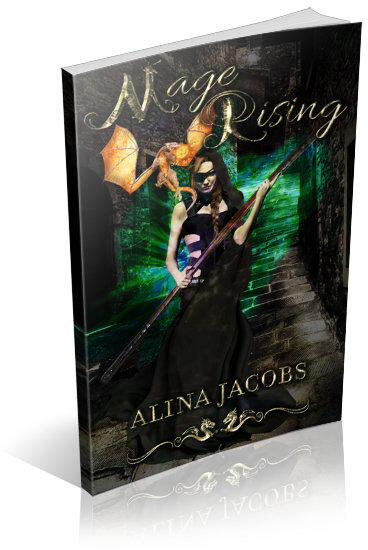 Zsanette of the Wulfila clan has just had her world turned upside down. Her best friend, Misko, was kicked out of the clan, and her mother just told her she’s the Emperor’s daughter. After stealing away in the night, she travels to the capital city to rescue Misko. On the way she is captured to be trained as a Black Tower mage.

Teaming up with friends she meets on the way and a small dragon, Zsanette bounces from one mishap to another as she tries to control her unusual and destructive power of magyk.

As she deals with obnoxious fellow students and races to solve a dangerous mystery, Zsanette finds herself fighting to get past the defenses of the handsome and secretive Garrett Walton, the powerful leader of the mages who fascinates her as much as the enigmatic society of Black Tower mages does.

I am organizing a release week blitz for Mage Rising by Alina Jacobs, a YA Fantasy novel. The blitz will run from April 2nd to April 6th, 2018, you can post on any day during this window. There will be excerpts/teasers available for your post, and every participant will be able to post the blitz-wide giveaway ($50 gift card) if you wish – giveaway prize courtesy of author. Social media sites are welcome.