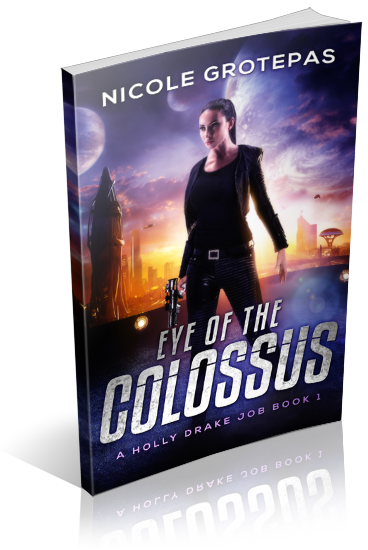 The City of Jade Spires, the biggest in the 6-moons, is a breathtaking symbol of hope and unity for the four races. But it’s also a hub of corruption. Holly Drake is proof of that. Fresh out of prison for a mistake framed to look like cold murder, she’s broke, jobless, and branded with a prison record.

When she lands a gig stealing back the Eye of the Colossus jewels, the chance for a big payout means she won’t have to depend on anyone else. She’s never had that kind of freedom. She’ll do it. Even if the work is only a shade lighter than outright crime.

But soon she finds herself pursued by thugs from the Shadow Coalition, an underworld government that wants her dead. Pulling off the heist without getting killed means putting trust in recruits she hardly knows. The clock is ticking to get the jewels, but a mistake now could be fatal. Chasing across the 6-moons to complete the job will test her grit and determination to succeed when everything is stacked against her. More than that, finding out just what secrets the 6-moons hold will either turn her into the hero the moon system needs, or destroy her…

I am organizing a release week blitz for Eye of the Colossus by Nicole Grotepas, Adult Sci-fi/Steam Punk/Space Opera novel. The blitz will run from April 19th to April 23rd, 2018, you can post on any day during this window. There will be excerpts available for your post, and every participant will be able to post the blitz-wide giveaway if you wish – giveaway prize(s) courtesy of author. Social media sites are welcome.

An email with the complete post info including promo items and giveaway details will be sent to all participants on April 16th.
HTML will also be provided.