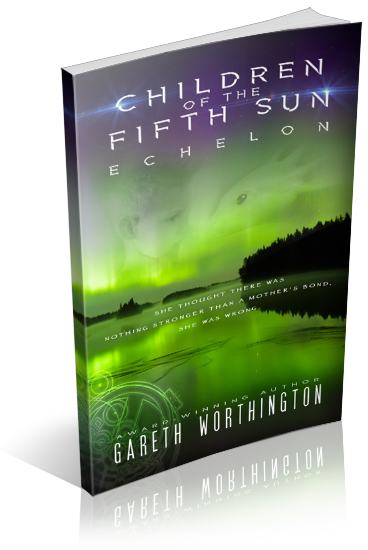 ***SEQUEL TO THE AWARD-WINNING CHILDREN OF THE FIFTH SUN***

SHE THOUGHT THERE WAS NOTHING STRONGER THAN A MOTHER’S BOND.
SHE WAS WRONG.

Fifteen thousand years ago, the knowledge bringers—an amphibious, non-humanoid species known as the Huahuqui—came after a great global flood, gifting humans with math, science and civility. We killed them all.

Seventy years ago, we found one of their corpses preserved in ice and eventually created a clone, named K’in. Our governments squabbled over the creature and we killed that, too.

Now, a sinkhole in Siberia has opened revealing new secrets and humans may once again have a chance to prove we deserve the gifts the Huahuqui bestowed.

Freya Nilsson has spent the last five years trying to forget her role in the Huahuqui cloning program. Instead, she hid her son, KJ, from the regimes and agencies who she believed would exploit him for the powers he acquired through his father’s bond with K’in.

An innocent trip to help KJ understand his abilities results in the global conspiracy she fought to bury exploding back to life. Chased by new foes, and hounded to put the needs of the world first, all Freya can think of is protecting KJ—at all costs.

I am organizing a release week blitz for Children of the Fifth Sun: Echelon by Gareth Worthington, an Adult Sci-fi novel. The blitz will run from August 14th to August 18th, 2018, you can post on any day during this window. There will be excerpts available for your post, and every participant will be able to post the blitz-wide giveaway if you wish – giveaway prize(s) courtesy of author. Social media sites are welcome.

An email with the complete post info including promo items and giveaway details will be sent to all participants on August 10th.
HTML will also be provided.

· The Magi Manifesto by Kale Lawrence
· Fauxmance by Cookie O'Gorman
· CHRIS by Nancy Brown
· The Selective Mute Princess by Samantha Jayne Grubey
· Shy Girls Can't Date Billionaires by Milly Rose
· Ruled by Blood by Emma Dean
· Rhapsody Of The Stars by Jannat Bhat
· Peaches and Cream by S. London
· Hiding from the Truth by AB Medley
· All This Time by Annabelle McCormack
· The Language of the Wind by M.R. Grand