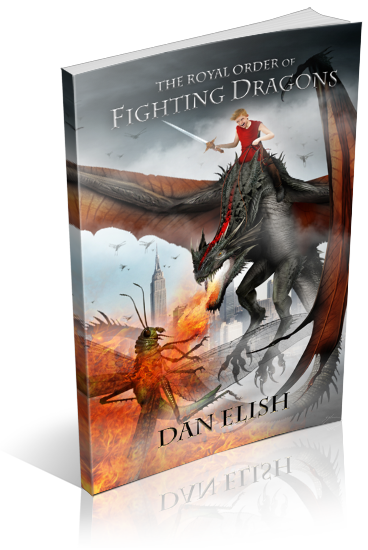 Ike Rupert Hollingsberry is haunted by the past because complete strangers won’t let him forget when his famous father died on the set of The Fighting Dragons, a cult favorite that still has people talking.

But when he’s attacked by a large locust, like the one that killed his dad, Ike is helped by the geekiest nerd of all, Elmira Hand.

“… destined to be a kid-pleasing classic. Readers will be captivated as Ike is drawn into the mysterious and dangerous world … I dare any fan of Harry Potter, Roald Dahl, Wonder Woman, Superman—any rollicking adventure story—to pick up The Royal Order of Fighting Dragons and not get hooked.
~Deborah Heiligman, Award-winning author of Vincent and Theo

I am organizing a book blitz for The Royal Order of Fighting Dragons by Dan Elish, an MG Urban Fantasy novel. The blitz will run from August 13th to August 17th, 2018, you can post on any day during this window. There will be excerpts available for your post, and every participant will be able to post the blitz-wide giveaway if you wish – giveaway prize(s) courtesy of author. Social media sites are welcome.

An email with the complete post info including promo items and giveaway details will be sent to all participants on August 10th.
HTML will also be provided.