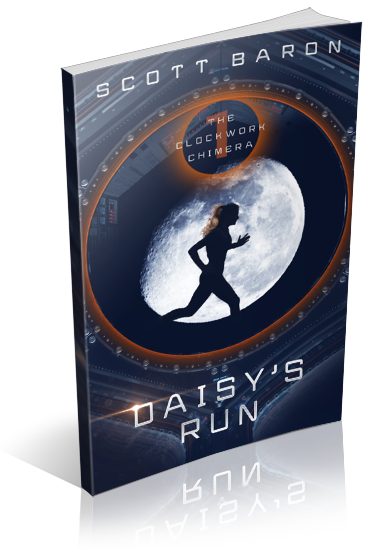 Life in deep space could be a drag sometimes, but Daisy supposed things could have been worse. They were still alive, after all, which was always a plus in her book. Now if only she could figure out who, or what, was endangering her return home, things would be just peachy.

It had been one hell of a way to start the day––being rudely snapped from a deep cryo-sleep, and in the middle of a ship-wide crisis to boot––but Daisy was pleased to note that the ship had not decompressed, the crew hadn’t been blasted into space, and, most importantly, they hadn’t simply blown up. At least not yet. So, they had that going for them, but being stuck on a damaged ship in the inky depths of space as it limped toward Earth was not exactly the relaxing trip home she’d imagined.

With the powerful AI supercomputer guiding the craft beginning to show some disconcerting quirks of its own, and its unsettling cyborg assistant nosing into her affairs, Daisy’s unease was rapidly growing. Add to the mix a crew of mechanically-enhanced humans, any one of whom she suspected might not be what they seemed, and Daisy found herself with a sense of pending dread tickling the periphery of her mind.

Something was very much not right––she could feel it in her bones. The tricky part now was going to be figuring out what the threat was, before it could manifest from a mere sinking feeling in her gut into a potentially deadly reality.

I am organizing a release week blitz for Daisy’s Run by Scott Baron, an Adult Sci-fi novel. The blitz will run from November 12th to November 16th, 2018, you can post on any day during this window. There will be excerpts and teasers available for your post, and every participant will be able to post the blitz-wide giveaway if you wish – giveaway prize(s) courtesy of author. Social media sites are welcome.

An email with the complete post info including promo items and giveaway details will be sent to all participants on November 9th.
HTML will also be provided.

· Counterfeit Lover by J.C. Farmer
· The Lost King by Frazier Alexander
· The Christmas Spirit by Alexandrea Weis
· The Night's Chosen by Emily Hornburg
· A Sweet, Soft Glow by Joshua Magnotta
· Hot Pickle by J.J. Knight
· Snowed In by Lindy Miller
· Dance with Death by Brynn Ford
· Talk Derby to Me by R.H. Tucker
· GoodKnight by Giulia Lagomarsino
· Relentless Habit by Karen Renee
· Prescription for a Lonely Heart by Rosalie Jardin
· A Haunted Love by Dakota Star
· The Six Month Lease by Melanie Munton