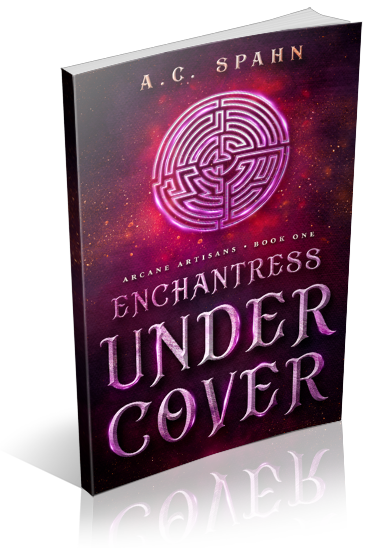 Adrienne Morales is a hunted woman.

Stalked by Voids—people immune to magic—and pursued by a deadly past, Adrienne wants nothing more than to avoid spells and sorcery. Her powers as an enchantress make that impossible. Every few days she must release the magic gathering around her, or it’ll steal her sanity. The only way to stay alive is to practice her magic in secret, hiding enchantments in works of art she sells in her craft store.

When a firebreathing psychopath controlled by enchantment tries to burn down her store, Adrienne unleashes her powers to stop him. Unfortunately her battle has a witness—Adrienne’s handsome business partner. Turns out he’s a Void, and sworn to a Union that executes rogue magic users. Worse, the firebreather isn’t the only victim to pop up around San Francisco. Someone is using magic to create monsters and destroy minds, and the Void Union wants them dead.

Now Adrienne must capture the rogue enchanter before they ruin more innocent lives—and before the Voids punish her for the rogue’s crimes. But Voids aren’t the worst thing chasing her. Every enchantment she crafts makes it more likely her past will track her down. And if it does, madness will be the kindest fate awaiting her.

I am organizing a release week blitz for Enchantress Undercover by A.C. Spahn, a New Adult Urban Fantasy novel. The blitz will run from March 4th to March 8th, 2019, you can post on any day during this window. There will be excerpts available for your post, and every participant will be able to post the blitz-wide giveaway if you wish – giveaway prize courtesy of author. Social media sites are welcome.

An email with the complete post info including promo items and giveaway details will be sent to all participants on March 1st.
HTML will also be provided.