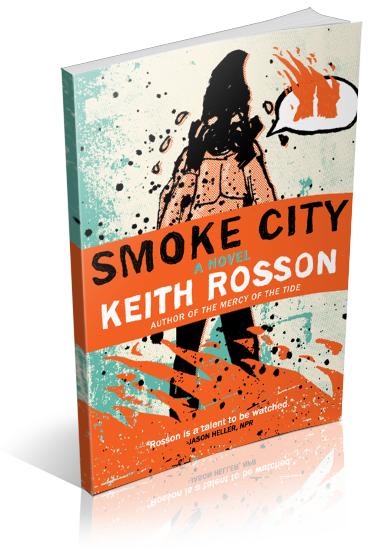 Marvin Deitz has some serious problems. His mob-connected landlord is strong-arming him out of his storefront. His therapist has concerns about his stability. He’s compelled to volunteer at the local Children’s Hospital even though it breaks his heart every week.

Oh, and he’s also the guilt-ridden reincarnation of Geoffroy Thérage, the French executioner who lit Joan of Arc’s pyre in 1431. He’s just seen a woman on a Los Angeles talk show claiming to be Joan, and absolution seems closer than it’s ever been . . . but how will he find her?

When Marvin heads to Los Angeles to locate the woman who may or may not be Joan, he’s picked up hitchhiking by Mike Vale, a self-destructive alcoholic painter traveling to his ex-wife’s funeral. As they move through a California landscape populated with “smokes” (ghostly apparitions that’ve inexplicably begun appearing throughout the southwestern US), each seeks absolution in his own way.

I am organizing a release week blitz for the paperback of Smoke City by Keith Rosson, an Adult Magical Realism novel. The blitz will run from March 26th to April 1st, 2019, you can post on any day during this window. There will be excerpts available for your post, and every participant will be able to post the blitz-wide giveaway if you wish – giveaway prize(s) courtesy of publisher. Social media sites are welcome.

An email with the complete post info including promo items and giveaway details will be sent to all participants on March 22nd.
HTML will also be provided.