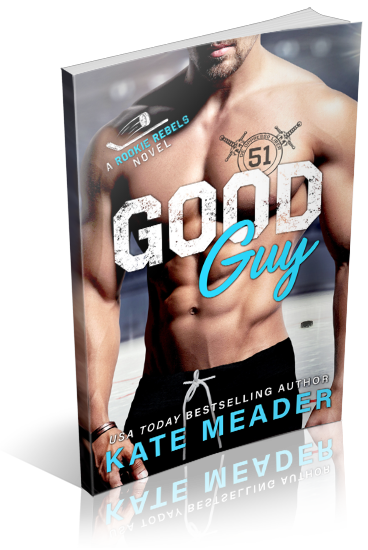 Fans can’t get enough of Levi Hunt, the Special Forces veteran who put his NHL career on hold to serve his country and fight the bad guys. So when his new Chicago Rebels bosses tell him to cooperate with the press on a profile, he’s ready to do his duty. Until he finds out who he has to work with: flame-haired, freckle-splashed, impossibly perky Jordan Cooke.

Also known as the woman he should not have kissed the night she buried her husband, Levi’s best friend in the service.

Hockey-stick-up-his-butt-serious Levi Hunt might despise Jordan for reasons she can’t fathom—okay, it’s to do with kissing—but her future in the cutthroat world of sports reporting hangs on delivering the goods on the league’s hottest, grumpiest rookie. So what if he’s not interested in having his life plated up for public consumption. Too bad. Jordan will have to play dirty to get her scoop and even dirtier to get her man. Only in winning the story, she might just lose her heart . . .

In this standalone romance set in the Chicago Rebels world, a new generation of players take to the ice and learn that all’s fair in love and hockey.

I am organizing a release week blitz for Good Guy by Kate Meader, an Adult Sports Romance novel. The blitz will run from July 29th to August 5th, 2019, you can post on any day during this window. There will be excerpts available for your post, and every participant will be able to post the blitz-wide giveaway if you wish – giveaway prize(s) courtesy of author. Social media sites are welcome. ARCs are also available for blitz participants.

An email with the complete post info including promo items and giveaway details will be sent to all participants on July 19th.
HTML will also be provided.