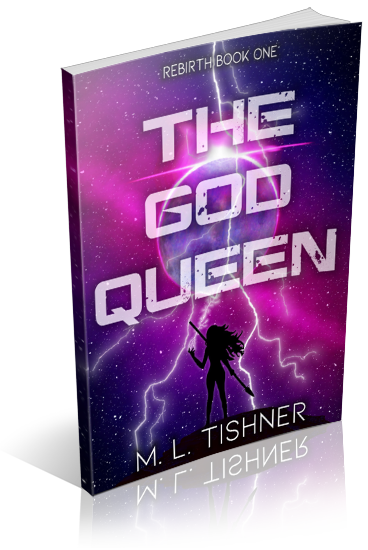 The return of the God Queen is not what everyone hoped…

Humans have long since spread their numbers among the stars. Now far, far into the future, war has torn the Tyre Star Cluster into two major political factions. The militant Dominion have gained the upper hand in the last decade when their champion murdered the hope of the progressive Federation: Niklaryn Ettowa. Some considered the war to be almost won.

Yet there are those who claim the war will not be ended by mortals…but by the rebirth of the gods.

Rei lived most of her life bartending on one Earth’s backwater towns. She daydreams of something more, traveling the stars, and destroying the man who murdered her brother Niklaryn. Her dream is within her grasp only if she accepts her fate as the God Queen.

Bronx is disillusioned with being a reincarnated god, let alone a reaper. He pays his penance by keeping people at a distance and taking up the mantle of a combat medic. When the sister of his old mentor Niklaryn storms in to join the cause will he find something worth fighting for?

Together with others, they must help the Federation tip the scales in their favor, but everyone seems to have their own plans for what the gods should do.

Jupiter Ascending meets X-Men in this epic New Adult space opera bursting with star-crossed romance, elemental magic, and an adventure across the star cluster, perfect for fans of A Spark of White Fire.

I am organizing a release week blitz for The God Queen by M.L. Tishner, a New Adult Sci-fi/Fantasy novel. The blitz will run from October 20th to October 26th, 2019, you can post on any day during this window. There will be excerpts available for your post, and every participant will be able to post the blitz-wide giveaway if you wish – giveaway prize(s) courtesy of author. Social media sites are welcome.

An email with the complete post info including promo items and giveaway details will be sent to all participants on October 17th.
HTML will also be provided.