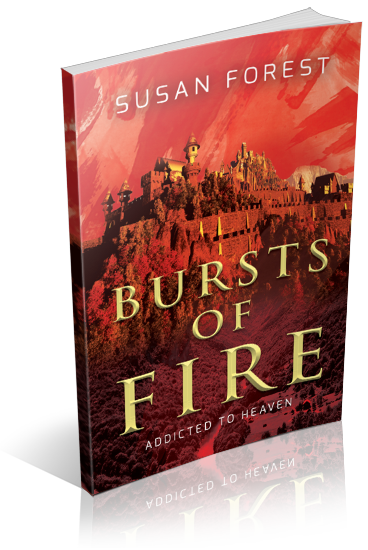 Bursts of Fire begins an epic political fantasy of revenge, addictions, and redemption for three magiel sisters in an empire where magic has become suspect and where love and loyalty—for one’s lover, one’s family, one’s country—are tested. If Heaven desires the very earth be burned, what place can those below hope for, when the flames come for them?

The Falkyn sisters bear a burden and a legacy. Their mother, the imperial magiel of the kingdom of Orumon, protects her people from the horrors of the afterlife by calling upon the Gods with a precious Prayer Stone. But war among the kingdoms has brought fire and destruction to their sheltered world. When a mad king’s desire to destroy the Prayer Stones shatters their family, the three girls are scattered to the wilderness, relying on their wits and powers they don’t yet master.

Assassin. Battle tactician. Magic wielder. Driven by different ambitions, Meg, Janat, and Rennika are destined to become all these and more. To reclaim their birth right, they must overcome doubtful loyalties within a rising rebellion; more, they must challenge a dogma-driven chancellor’s influence on the prince raised to inherit his father’s war: a prince struggling to unravel the mystery of his brother’s addiction to Heaven.

To Survive. To Fight. To Restore Balance.

THE TRAILER REVEAL:
I am organizing a trailer reveal for Bursts of Fire by Susan Forest, a New Adult Political Fantasy novel. The reveal is scheduled for Thursday, November 21st, 2019 (after 12:01AM EST). Social media sites are welcome.