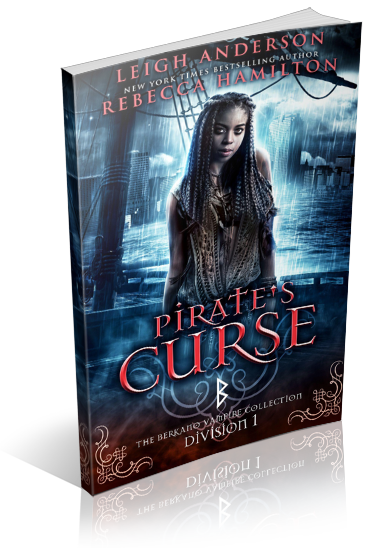 Once upon a time, a vampire and a witch fell in love, and that love fractured the world. Now divided into sixteen isolated Divisions, the world is an unstable and dangerous place.

In the Division of NOLA, Catheryn Beauregard fears her burgeoning magical powers. Hiding as just another slave in the home of the Hoodoo Queen, Catheryn hopes her simplistic powers will simply go unnoticed. And her plan seems to be working…until the Hoodoo House is attacked by a ruthless band of vampire pirates.

Captain Rainier Dulocke and his crew need humans to feed on. In an act of desperation, they beset the Hoodoo House and take ten slaves to sustain them. Rainier takes a girl named Catheryn for himself, but her blood is giving him terrible side effects. Still, he refuses to give her up. Even when the Hoodoo Queen demands her return.

The NOLA Division is in danger. The waters are rising. Food is running out. And the Hoodoo Queen is about to destroy everything that’s left if the pirates don’t meet her request. Now Catheryn must choose who will die: the humans who sold her, the witches who bought her, or the vampires who stole her. If she fails to decide, everyone could die.

PIRATE’S CURSE is a standalone contribution to The Berkano Vampire collection. Stories can be read in any order. To learn more, visit FallenSorcery.com

I am organizing a release week blitz for Pirate’s Curse by Leigh Anderson & Rebecca Hamilton, an Adult Paranormal/Fantasy novel. The blitz will run from October 21st to October 25th, 2019, you can post on any day during this window. There will be excerpts available for your post, and every participant will be able to post the blitz-wide giveaway if you wish – giveaway prize(s) courtesy of author. Social media sites are welcome.