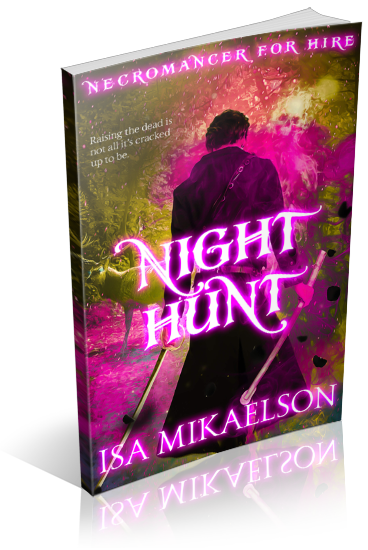 Betrayal takes a backseat to survival.

Called back to his small town in Washington for a funeral, Ezra Zaan finds himself exactly where he doesn’t want to be … in the middle of paranormal problems with the vampire ex who broke his heart. The new owner of the Book of the Dead, Ezra’s tasked with defending the town against the Night’s Huntsmen—a deadly group of ghostly hunters who run a magical competition that ends in death and ruin for all paranormal beings. It is set to begin, and the only way to survive is if the factions of witches, vampires, and shifters band together.

Which is easier said than done when their hatred has them at each other’s throats. Investigating the breaches in the veil between their world and the other, they uncover a conspiracy that threatens to tear them apart.

It’s a race against time and their own tangled past as they prepare for the battle of a lifetime.

I am organizing a release week blitz for Night Hunt by Isa Mikaelson, a YA Urban Fantasy novel. The blitz will run from March 13th to March 17th, 2020, you can post on any day during this window. There will be excerpts available for your post, and every participant will be able to post the blitz-wide giveaway if you wish – giveaway prize courtesy of author. Social media sites are welcome.