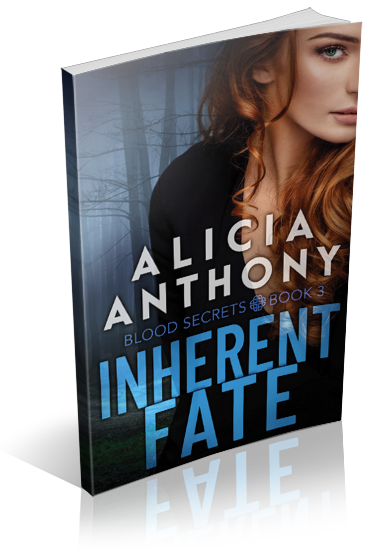 A discarded asset stripped of her identity…

An innocent life hanging in the balance…

Who would you trust if the world was out to get you?

Losing Liv Sullivan in a Bureau operation gone bad turned ex-agent Ridge McCaffrey into a broken man. So when fate reunites him with the woman he thought was dead, he’ll risk anything to make her part of his life again.

Liv Sullivan returned to the States with two goals: end the FBI’s corrupt GenLink psychic intelligence program and reclaim the life it stole from her. But when the case against GenLink exposes a threat against Ridge’s son, the cost becomes too great. Refusing to destroy more lives, she leaves Ridge, and the chance to reclaim her identity, behind.

But as a new generation of GenLink closes in, once-trusted allies become enemies, and long-buried secrets threaten.

Can Liv and Ridge end GenLink before echoes of the past destroy their future?

Inherent Fate is the compelling third installment in the Blood Secrets psychological suspense series. For fast-paced, emotionally intense story lines that keep you up past your bedtime, and intricate plots laced with romance, this award-winning series is for you.

Book 3 of 3. Series is best enjoyed in sequence.

I am organizing a release week blitz for Inherent Fate by Alicia Anthony, an Adult Psychological Suspense novel with elements of romance. The blitz will run from July 21st to July 25th, 2020, you can post on any day during this window. There will be excerpts available for your post, and every participant will be able to post the blitz-wide giveaway if you wish – giveaway prize(s) courtesy of publisher. Social media sites are welcome.

An email with the complete post info including promo items and giveaway details will be sent to all participants on July 16th.
HTML will also be provided.