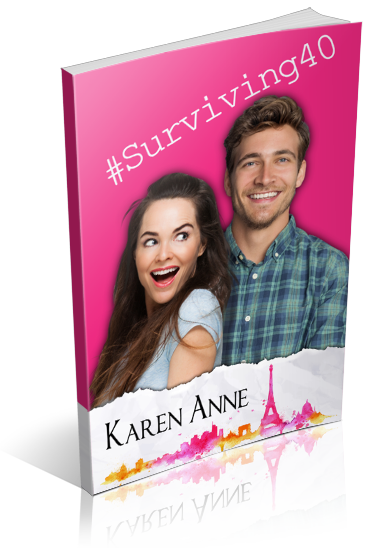 Piper Quinn was more than ready to turn forty. So ready she began planning her Parisian celebration at thirty-five. That is until her life fell apart at thirty-nine. Left staring at divorce papers, Piper instantly regrets signing that pre-nup. How was she to know her husband would turn her in for a younger model?

After “accidentally” setting her Manhattan apartment on fire, Piper finds herself not only newly divorced, but newly homeless. Forced to move back home with her parents and take a job she doesn’t want, she soon discovers the gossip train in town moves faster than the subway system in New York—and she’s the hottest topic to leave the station. If matters weren’t bad enough, life in rural Connecticut seems downright claustrophobic when her sixteen year old daughter stops talking to her.

A blast from her past is the spark Piper needs to reignite her life. Owen Clarke, an old high school flame has the ability to turn back time making Piper feel sixteen again. The instant chemistry between them gives Piper hope of redeeming her second act. There’s only one teeny, tiny three foot problem: Owen’s daughter is in Piper’s Kindergarten class. With temptation lurking in every corner, Piper needs to put her emotions—and hormones— in check.

No one said getting older was easy, but turning forty just became a game of survival.

I am organizing a release week blitz for #Surviving40 by Karen Anne, a Romantic Comedy novel. The blitz will run from August 25th to August 29th, 2020, you can post on any day during this window. There will be excerpts available for your post, and every participant will be able to post the blitz-wide giveaway if you wish – giveaway prize(s) courtesy of author. Social media sites are welcome.