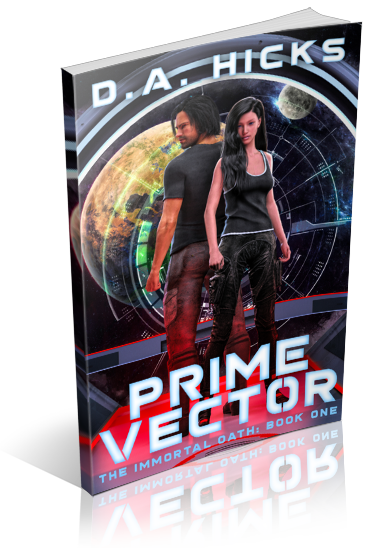 If you like immortals in space, romance, and fast-paced thrilling action, you’ll love Prime Vector!

During a routine tour to Earth, first-year cadet Catita witnesses the murder of her immortal twin. To unravel the mystery behind her sister’s death, Catita will have to assume her sister’s identity and join the dreaded Forever Queen’s immortal army.

Tek, a mercenary from Earth, has finally found a way to save his sister from a terminal illness. That is, if he’s willing to pull the heist of his life: kidnap the Martian princess in return for his sister’s cure. But the princess has a mission of her own and leaving Mars isn’t an option.

As both Catita and Tek struggle to do right by their loved ones, their paths cross and they soon find themselves in the middle of a century-old feud to control the virus that gives its host immortality.

I am organizing a book blitz for Prime Vector by Diana A. Hicks, a sci-fi romance novel for all ages (MC is early 20s). The blitz will run from September 29th to October 5th, 2020, you can post on any day during this window. There will be excerpts available for your post, and every participant will be able to post the blitz-wide giveaway if you wish – giveaway prize(s) courtesy of author. Social media sites are welcome.

An email with the complete post info including promo items and giveaway details will be sent to all participants on September 25th.
HTML will also be provided.

· Leather and Lace by Magen Cubed
· Betrayed by Jacklyn Daher