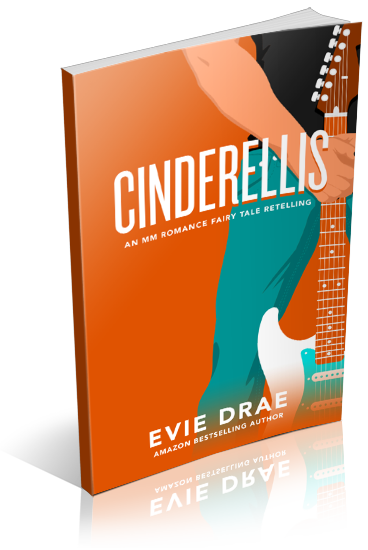 As the son of music industry royalty and a famous rock star in his own right, Henry “Cinder” Cinderford has spent his life on the road. Craving stability, he signs on to do a special limited engagement in Las Vegas and plans to spend the next six months discovering what it means to call somewhere home.

After losing his mom at a young age, Ellis Tremaine survived a childhood with an abusive stepfather who took out his anger on the son he never wanted. Nearly two decades later, as he continues to struggle against the emotional manipulations of his family, even Ellis’s career remains out of his control.

That is, until Ellis meets none other than the Prince of Pop himself. From attraction to friendship to something so much more, Ellis and Cinder become the celebrity ‘ship known as “Cinderellis.” But as the end of Cinder’s stint in Vegas looms near, reality threatens their storybook romance.

Fortunately, in the land of fairy tales, there’s a happily ever after for every once upon a time.

I am organizing a release week blitz for Cinderellis by Evie Drae, an MM Romance Fairy Tale Retelling. The blitz will run from February 25th to March 3rd, 2021, you can post on any day during this window. There will be excerpts available for your post, and every participant will be able to post the blitz-wide giveaway if you wish – giveaway prize(s) courtesy of author. Social media sites are welcome.

An email with the complete post info including promo items and giveaway details will be sent to all participants on February 22nd.
HTML will also be provided.