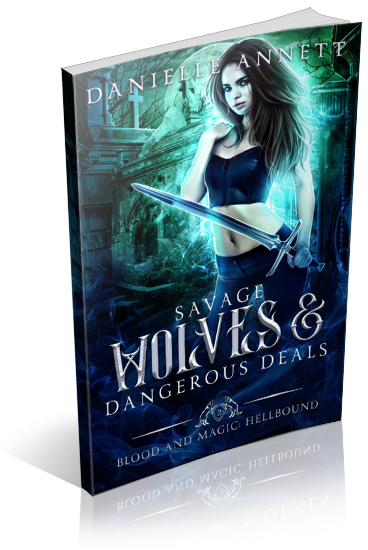 He’s savage.
He’s sinful.
He’s everything I told myself I didn’t need.

But for just one night, I’ll give in to temptation.
I’ll forget he’s a shapeshifter and that I’m not.
I’ll forget the Pack would never approve.

Because after tonight I’m moving.
Our paths won’t cross again.
Only that one night gives me more than I bargain for and nine months later I deliver a bundle of joy complete with ten tiny fingers and ten perfect toes.

A year and a half later, I’m back.
But this wolf is no longer the shifter of my dreams.
Now he haunts my nightmares.
And what is he going to think when he learns he has a son, one who isn’t a just a wolf?

I am organizing a release week blitz for Savage Wolves and Dangerous Deals by Danielle Annett, an Adult Urban Fantasy/Paranormal Romance novel. The blitz will run from April 1st to April 5th, 2021, you can post on any day during this window. There will be excerpts available for your post, and every participant will be able to post the blitz-wide giveaway if you wish – giveaway prize(s) courtesy of author. Social media sites are welcome. ARCs are also available for blitz participants.