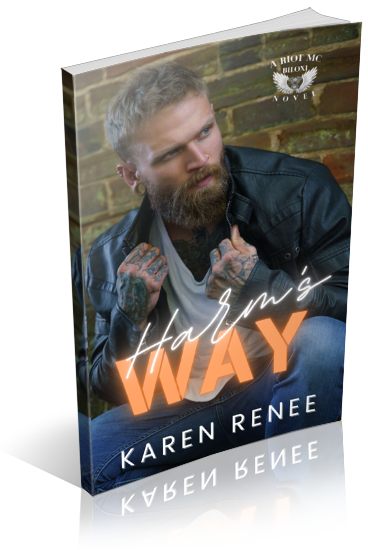 If it weren’t for bad luck, Stephanie Combes would have no luck at all.

On top of stealing her identity and ruining her credit, Stephie’s ex-boyfriend has shamed her in the most unexpected way. As a card dealer, she’s determined to make a fresh start in Biloxi where the tips are better and she can climb out from under her shame and debt. Running into her long-lost stepbrother and his sexy-as-sin best friend wasn’t in the cards, but that was her bum-luck rearing its ugly head. The last thing she wants is another man in her life.

When it rains it pours, but lucky for Stephie, Har is there to save the day during the deluge. Staying with Har temporarily should be no problem, but they can’t deny their lust. The more Stephie distances herself, the more Har fights to keep her around. And he fights dirty.

Michael “Har” Walcott’s motorcycle club is in turmoil. As president of the Riot MC Biloxi chapter, he’s determined to get his club out of the drug trade, but his brothers are resistant. The last thing he needs is a woman dividing his focus from his brothers and his club… which is precisely when he meets a spunky and seemingly familiar brunette.
She’s familiar because Stephanie was once a stepsister to Har’s best friend Brute. Allowing her to distract him isn’t an option. But after her roof collapses, Har steps in to save the day. The more he learns about Stephie, the more he wants her to stay.

He fights his attraction, but he can’t control his impulses.

He hasn’t felt anything like this for a woman in years. It’ll be a cold day in hell before he lets it slip through his fingers again.

I am organizing a release week blitz for Harm’s Way by Karen Renee, an Adult MC Romance novel. The blitz will run from April 13th to April 19th, 2021, you can post on any day during this window. There will be excerpts available for your post, and every participant will be able to post the blitz-wide giveaway if you wish – giveaway prize(s) courtesy of author. Social media sites are welcome.

An email with the complete post info including promo items and giveaway details will be sent to all participants on April 9th.
HTML will also be provided.