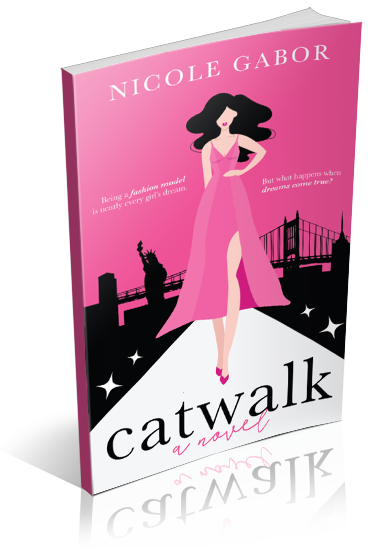 Eighteen-year-old, shy, suburban aspiring model Cat Watson suddenly has it all as the New York fashion world’s new “It” girl and she thinks she has everything she ever dreamed of—until she realizes be careful what you wish for, you just might get it.

Leaving her good-girl image behind, Cat quickly learns things aren’t always what they seem on the catwalk, and she’s faced with a decision that will change her life forever.

When 18-year-old Catherine Watson disobeys her parents and ditches her Ivy-league acceptance to start fresh as an aspiring model in New York City, a chance encounter with fashion world bigwigs gives her a world-class agent plus a boyfriend she only dreamed about. But as she navigates the fickle world of modeling, she realizes that to get ahead, she’ll have to leave herself behind—but is it worth it? Catwalk is an expertly written tale of first love, coming of age, and high-fashion, from award-winning author and editor Nicole Gabor, inspired by her own experiences as a runway model.

In her suburban hometown, Catherine had what most would consider a charmed life: a 4.0 GPA, a good-guy boyfriend who had his whole life planned out down to the two kids, two dogs, two-car garage—and it scared her to death. She wasn’t ready to follow a traditional path to a paint-by-numbers existence. She longed for adventure, for a life less…ordinary. When Catherine moves away to pursue her modeling dream in New York City and moves in with Jon-Michelle “Jonnie” who tackles the newly-named “Cat” as “her next project,” she revels in her newfound career, thinking “this is what it’s like to be young and beautiful in the greatest city in the world.”

“At that moment, it hit me. I was a mere mortal in a room full of demigods: actors, actresses, bygone legends of the stage and screen; men and women who had traipsed down red carpets all of their lives, whom the rest of the country, no, the world, had pined for, had paid to know the secrets of. Here I was standing among them, cavorting with twenty-first century royals.”

Cat meets Seth, a beautiful and kind but troubled New York scenester, the son of a ‘70s fashion model icon who fatally overdosed during her prime, and she feels strangely protective. She wants to save him like he saved her on her first night out on the town in New York City’s gritty yet swanky meatpacking district club scene.

When Cat is “discovered” by the one and only Philippe Borghetta, the hottest fashion designer in the pages of Vogue magazine, she thinks she has it all. Her life is thrust into an alternate universe, where star-studded cocktail parties, casting calls, go-sees, and nightclub openings revolve around her like constellations. She tries to play the part. Her former self, “Catherine,” was now a shadow of who she was and what she was becoming.

Cat thinks she’s finally gotten what she wanted all along—a chance to start over, a redo, a refresh. But as the lines blur between who she once was and who she wants to be, she’s reminded of her mother’s words, “Sometimes the things that are most worth fighting for are the things you already have.” Cat finds she has to make a decision that will change her life—and possibly the modeling world—forever.

Drawing on her own experiences in the fast-paced fashion model industry, former model and author of more than twenty children’s books, Nicole Gabor masterfully weaves a timeless story of self-discovery, coming of age, and the heartache of first loves. Catwalk is her debut young adult/new adult novel, available July 2021 wherever books are sold.

I am organizing a release week blitz for Catwalk by Nicole Gabor, a YA Coming-of-age novel. The blitz will run from July 6th to July 10th, 2021, you can post on any day during this window. There will be excerpts available for your post, and every participant will be able to post the blitz-wide giveaway if you wish – giveaway prize(s) courtesy of author. Social media sites are welcome. ARCs are also available for blitz participants.

An email with the complete post info including promo items and giveaway details will be sent to all participants on July 1st.
HTML will also be provided.