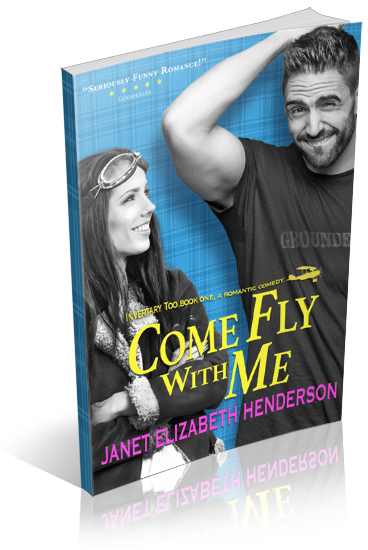 Brodie MacGregor and Katya Savage got married way too young. Barely out of high school, they thought they had everything in common and life planned out before them. Work hard and save, build their dream home on the land given to them as a wedding gift, and then bring up their kids in Invertary and live happily ever after…

Yeah, it didn’t go as planned.

Because two years into their wedded bliss, Katya discovered that her great-grandmother had been a WW2 fighter pilot for the Soviet Union. After that, all she could think about was learning to fly and finding a plane just like her great-grandmother’s to bring back to Scotland. Brodie was not on board with their sudden change in life direction, nor with Katya’s new obsession. Feeling as though he was being backed into a corner, Brodie did what all dumb-as-dirt men do in such circumstances—he gave his wife an ultimatum.

The plane or him.

So…ten long years later, Katya’s back with the plane that cost them their marriage, and she plans to use the land they own together to set up a scenic-flight business. The only problem is Brodie also has plans for that land. After years of saving, he’s finally ready to build his dream home. With two different dreams, one strip of land, and a couple with some seriously unresolved issues, it’s a case of last-one-standing gets the prize. Because neither will back down from getting what they want.

As Katya and Brodie fight it out over their future, all anyone else can do is watch.

I’m organizing a release week blitz for Come Fly With Me by Janet Elizabeth Henderson, an Adult Romantic Comedy novel. The blitz will run from June 28th to July 3rd, 2021, you can post on any day during this window. There will be excerpts available for your post, and every participant will be able to post the blitz-wide giveaway if you wish – giveaway prize(s) courtesy of author. Social media sites are welcome. ARCs are also available for blitz participants.

An email with the complete post info including promo items and giveaway details will be sent to all participants on June 24th.
HTML will also be provided.