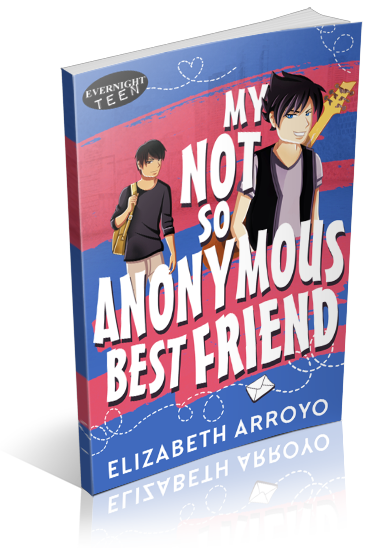 Noah aka NOS2321: Gamer. Weeb. Up-and-coming rock star. And gay. Encouraged by his anonymous pen pal, XES6969, Noah takes the leap and comes out of the closet—no instructions needed—accidentally sending his father to the hospital during his reveal. Despite his horrible dating track record which included two girls (because it was required that he at least try) and one boy (because he had to start somewhere), Noah believes in happily ever after. That belief gets tested when he falls for Evan Santiago.

Evan aka XES6969, believes in sacrificing yourself for those you love. Learning NOS’s identity hadn’t been his fault. Except he carries the lie which begins to fester, trapping him into silence. When a stray football brings them together, Evan no longer wants to keep silent. And when he learns that Noah is interested too, he takes a chance at love, risking everyone he’s tried to protect, including himself.

I’m organizing a pre-order blitz for My NOT So Anonymous Best Friend by Elizabeth Arroyo, a YA LGBTQ+ Romance novel. The blitz will run from April 25th to April 29th, you can post on any day during this window. There will be excerpts available for your post, and every participant will be able to post the blitz-wide giveaway if you wish – giveaway prize(s) courtesy of author. Social media sites are welcome.

An email with the complete post info including promo items and giveaway details will be sent to all participants on April 22nd.
HTML will also be provided.