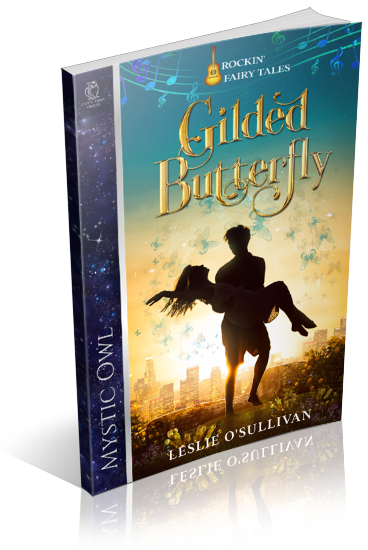 Gilded Butterfly is the second book in the Rockin’ Fairy Tales adult romantasy series by Leslie O’Sullivan. King Midas and the Golden Touch meets King Lear in a slow-burn, friends to lovers, romance set against the backdrop of a fictional Hollywood music scene.

Adair Holliday, a Hollywood producer wunderkind, is slated to step up as showrunner of the Lear’s lucrative TV franchise. He must constantly temper his skepticism over best friend, Chorda’s, practice of magic, but his biggest challenge is denying romantic feelings for her.

When Chorda goes disastrously off-script during the live broadcast of the season finale, Lear banishes her from the show and his life. Adair follows his friend into exile with a plan to reconcile father and daughter. Away from the pressures of Hollywood, a steamy encounter under a waxing moon, deepens friendship into romance. Now, the two must reverse Midas’ edict to save both their professional futures and new-found love.

I’m organizing a release blitz for Gilded Butterfly by Leslie O’Sullivan, an Adult Fantasy Romance novel. The blitz will run from July 21st to July 25th, 2022, you can post on any day during this window. There will be excerpts available for your post, and every participant will be able to post the blitz-wide giveaway if you wish – giveaway prize(s) courtesy of author. Social media sites are welcome.

An email with the complete post info including promo items and giveaway details will be sent to all participants on July 18th.
HTML will also be provided.