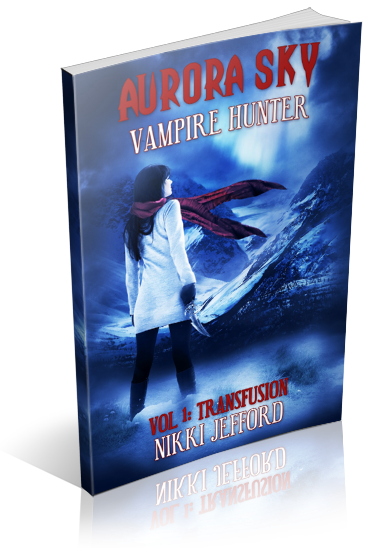 If there is one thing eighteen-year-old Aurora Sky wants, it’s to get off the iceberg she calls home. Being kissed before she graduates wouldn’t hurt either.

Then a near-fatal car wreck changes everything. Government agents step in and save Aurora’s life in exchange for her services as a vampire hunter. In Alaska. Basically she’s a glorified chew toy. All thanks to her rare blood type, which sends a vampire into temporary paralysis right before she has to finish the job… by hand.

Now Aurora’s only friends are groupies of the undead and the only boy she can think about may very well be a vampire. And if he’s a vampire, will she be forced to kill him?

At the end of the hour, Denise said an abrupt, “See you at lunch.”
Well, she could forget about juicy details ’cause I wasn’t dishing. Bitchy behavior deserved
no rewards. Maybe Tracey Rowen in third period French would appreciate the story.
At least I wasn’t running late for French because in about three seconds, Scott Stevens
would pass me in the hall.
Speaking of juicy delights.
I swore he moved in slow motion when he rounded the corner.
Scott had the thin, towering build going for him. He didn’t wear a letterman jacket, which he could have as captain of the basketball team, but Scott was the kind of guy who had his own killer style. Best of all, he looked me in the eyes and smiled whenever he saw me. And that is why I, Aurora Sky, for the first time in my life, had a major crush on a jock.
Too bad he and Emily Horton were an item.
“Hi, Aurora.”
“Hey, Scott.”
After he passed, I ducked into the girl’s bathroom at the end of the hall. A group of juniors huddled together and leaned into the mirror as they applied makeup. They’d all dyed their hair jet black with varying streaks of colors, as if to help tell each other apart. One had blond streaks, one red, and another blue.
The girls moved several inches to give me room. When I looked in the mirror, I tried to recreate the same smile I’d flashed Scott. My lips curved over a set of straight teeth. I pulled my hair over my shoulders. That would have looked better, but I always pushed it out of the way.
The group beside me finished their faces and lips. The girl with the blue streaks rubbed concealer with two fingers over a massive hickey on her neck.
As I headed out, the warning bell rang.
At the end of the day, Denise started spinning the combo on her locker at the same time as me. I got distracted and had to start over.
Once she had her coat on, Denise shut her locker with a thud. “See you later,” she said, hoisting her backpack over one shoulder So now she couldn’t wait to walk out to our cars together?
Okay then.
I zipped up my jacket a minute later and headed for the student parking lot alone. The moisture on my lashes froze as soon as I stepped outside. Exhaust from idling cars hovered in the stagnant air. Not only was this time of year cold and dark, it turned my stomach inside out.
Once the car stuttered to life, I smacked my mittens together to keep from freezing solid and let the vents do their work unthawing the windshield. After the ice turned to droplets, I swiped the windshield with the wipers. They carved a porthole into the glass and grated against the coarse outer layers of ice.
The roads hadn’t thawed, not even with the blast of exhaust pipes and friction of tires running across the polished ice all day. Tires spun in the parking lot. The truck in front of me gunned it and slid sideways onto the road.
College couldn’t come soon enough.
I turned the radio on and sung along softly to the lyrics as I passed mounds of snow that had melted during a warm spell the previous week. This week they’d refrozen into white misshapen humps over the landscape.
My tires skid at the first red stoplight. I slid forward four inches. Getting started again took a moment. Too much gas and my tires spun in place.
Once I lived on campus at Notre Dame there would be no more playing slip and slide on the streets. I planned to walk everywhere on solid pavement.
I passed the fast food chains lining the road just blocks from Denali High. On the long straight stretch home I drove on autopilot until business centers turned to neighborhoods.  Small gaps of forest arched over the sides of the road. I was almost home when I took the      sharpest curve on Jewel Lake Road.
As I rounded the corner a SUV appeared in front of me, speeding around the bend. The car made a horrible skidding sound before sliding into my lane.
Time inched forward.
Tires screeched. I braked, but the car slid out from under me. Light glinted off the SUV’s front windshield, and for a moment, I saw the driver—a boy wearing a blue bandana around his forehead. Maybe I would have found him cute if he weren’t about to kill us both.
In seconds, he would hit me. And I couldn’t do anything. I couldn’t brake. I couldn’t dodge him. This was it.
I saw the boy’s face. I read his lips. “Oh, shit.”
We said the words together.
In the event of a catastrophe, one thing is sure. Your life ends on a curse. 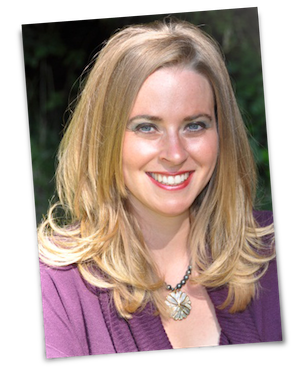 Nikki Jefford is a third generation Alaskan who loves fictional bad boys and heroines who kick butt. She is the author of the Spellbound Trilogy and upcoming Aurora Sky: Vampire Hunter series. Nikki married Sebastien, the love of her life, while working as a teaching assistant in France. They now reside in the not-so-tropical San Juan Islands, 70 miles northeast of Forks, Washington.