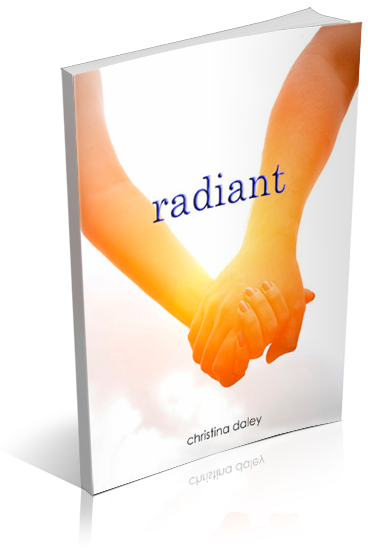 Mary is part Vietnamese. Carter is a complete jerk. Normally, they don’t talk much.

But when Mary’s in an accident on the way to school one morning, Carter nearly dies saving her life. The doctors say his chances of living are slim, and Mary’s feeling the full weight of survivor’s guilt.

However, Carter’s back at school in a matter of days, as if nothing had happened. Although, he is a little “glitchy,” and he’s developed a sudden and intense interest in Mary. She thinks he’s suffering from major brain trauma from the accident. Or that he’s been possessed.

As it so happens, Carter really is possessed. And the thing controlling him is having the time of its life learning to be human.

Featuring a diverse cast of characters, RADIANT is a funny “paranormal-lite” story about being human, being in love, and being healed. Christina Daley made her first book with neighborhood friends when she was four years old. They “wrote” out some semblance of lettering with crayons, cut up a cardboard box for the cover, and bound it all together with clear adhesive tape. It was brilliant.

Quite a few years later, Christina is trying her hand at writing “real” books. She lives in Dallas, Texas, with a pet plant named Herb.

I am organizing a release day blitz for Radiant by Christina Daley, a YA Paranormal Romance novel. The blitz runs from July 23rd to July 26th, you can post on any day during this window. There will be excerpts and guest posts/interviews available for your post, and every participant will be able to share the grand prize Rafflecopter if you wish.