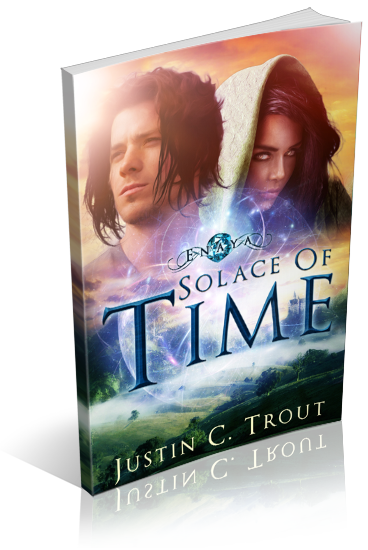 Nile Whitman thought he had withstood the test of Time, but when he discovers an ancient artifact known as Enaya, his life will change forever.

Enaya, a powerful and magical stone, alters time by bringing a futuristic city into Nile’s time period. The leader of this city, Norcross Kenneth, falls in love with Nile’s world and the magic within it, and he will stop at nothing until both their worlds are united. After Nile’s kingdom is destroyed by this new unknown force, he sets out on an adventure to send the future back into their dimension.

It’s not just this new threat that opposes Nile; the Lucian Empire has risen, and the Snake Queen wants Nile all to herself. When Nile forms a resistance with an unlikely band of heroes, he is forced to come to terms with his past and with the decisions that will affect his future.

Nile will have to embrace who he is if he is going to protect the people he loves, and in doing so, he will have to depend on Enaya, the element of time.

Justin C. Trout was born in Richlands, V.A. Justin spent a majority of his childhood writing stories. When he was in kindergarten, he shared his first “dinosaur” story with his classmates. With a passion to draw and share his stories, Justin began writing novels when he was only 12 years old. It was at this age that the Enaya series was born. He wrote a majority of the first drafts while he attended Lebanon High School. As he got older, Justin worked several odd jobs such as fast food, cashier, work study and retail. Justin decided to go back to college to obtain his degree where he could work in the mental health profession. It was in college when he decided to pursue publishing. Obtaining a master’s in education with specialization in counseling from Lindsey Wilson College, Justin is a children’s therapeutic day treatment counselor and an avid writer. He has also appeared in a number of short films and recently wrote and directed his first indie film, Fade Out. Enaya: Solace of Time is book 1 in an 8 part series.