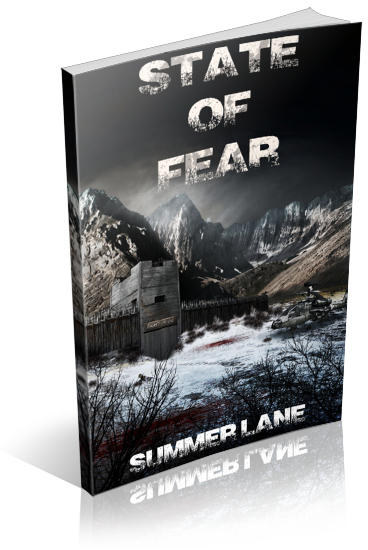 The world has gone nuclear, and the militias have met their first major defeat.

Torn and desperate, Cassidy Hart and her team make a difficult decision to relocate their forces to the cold, barren wilderness of Alaska. In the snowy mountains of the Gates of the Arctic, Yukon City has become a stronghold for survivors of the apocalypse.

Commander Chris Young remains in California to combat the shadowy forces of Omega, while Cassidy attempts to rebuild the militia’s strength at Yukon City. Uriah True has ideas of his own when it comes to surviving, and the militias are splitting apart.

Veronica Klaus is unleashing hell upon the west coast. The true, terrifying nature of Omega is revealed at last. A dangerous, desperate move is made to find reinforcements and seize a weapon that could give the militias an upper hand.
The downside?
It just might kill everyone on planet earth.

I am organizing a release week blitz for State of Fear by Summer Lane, a New Adult Dystopian novel. The blitz will run from July 20th to July 22nd, 2016, you can post on any day during this window. There will be excerpts available for your post, and every participant will be able to post the blitz-wide giveaway if you wish – giveaway prize courtesy of author. Social media sites are welcome.

An email with the complete post info including promo items and giveaway details will be sent to all participants on July 18th.
HTML will also be provided.