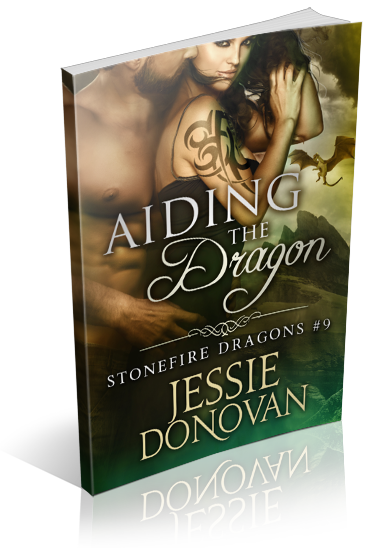 Teagan O’Shea is a rare female dragon-shifter leader. While her Irish clan has a tradition of female leaders, they have always had to hide behind a male face publicly to prevent the other clans from viewing them as weaker and then attacking. When the truth leaks, Teagan is faced with a choice—hand over the leadership to a male or invite the challengers to a leadership trial and earn her place. Out to prove having a penis isn’t required to be a leader, she picks the latter.

Aaron Caruso is sent to Ireland under the guise of repairing relations between two clans on the isle of Ireland. However, upon arrival he learns the truth. Determined to secure Teagan’s place so he can escape her alluring eyes and addicting personality, he busies himself with helping her any way he can. A female used him once and he’s not about to go through that again, no matter how much the Irish female tempts him.

As the pair work together on preparations for the leadership trial, both Aaron and Teagan start to see each other in a new light. Both have their own self-imposed loneliness and yearn for something they can’t have. Can Aaron and Teagan not only change tradition but also open their hearts? Or will they each be doomed to live alone to fight their inner battles?

I am organizing a release week blitz for Aiding the Dragon by Jessie Donovan, an Adult Paranormal/Fantasy novel. The blitz will run from May 25th to May 29th, 2017, you can post on any day during this window. There will be excerpts and teasers available for your post, and every participant will be able to post the blitz-wide giveaway (incl gift card, signed book & swag) if you wish – giveaway prizes courtesy of author. Social media sites are welcome.

An email with the complete post info including promo items and giveaway details will be sent to all participants on May 22nd.
HTML will also be provided.