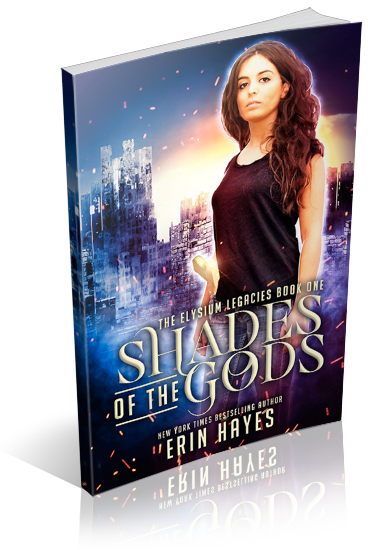 Caught between life and death, all Callie wants is to live again.

Homicide detective Callie Saunders knows that death isn’t all pearly gates and angels. After being hit by a bus, she finds that it’s the ancient gods and goddesses of Greek mythology who are in charge of everything.

So when Hades offers her a deal, she accepts. If she wants to be brought back to life, she’ll have to figure out who is trying to kill his son. But if she fails, both her soul and the world will be destroyed.

With the odds mounting against her, it’ll take everything she has within her to wake up from death. But the rules are constantly changing. And someone wants her to stay dead.

(This book was formerly titled Death is but a Dream. The covers and titles have changed for The Elysium Legacies, but the content is still the same.)

I am organizing a sale blitz for Shades of the Gods by Erin Hayes, an Adult Mythology/Fantasy novel. The blitz will run from June 19th to June 25th, 2017, you can post on any day during this window. There will be excerpts available for your post, and every participant will be able to post the blitz-wide giveaway if you wish – giveaway prize(s) courtesy of author. Social media sites are welcome.