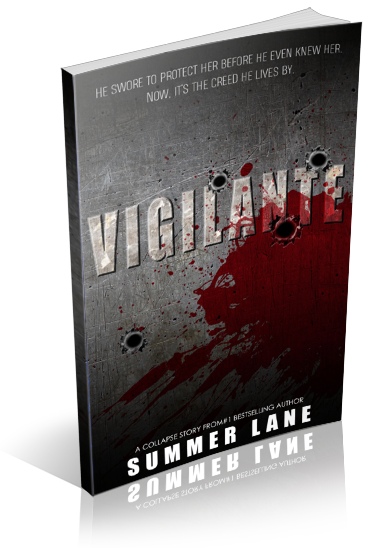 I swore to protect her before I even knew her.
Now, it’s the creed I live by.

Uriah True is a dangerous man. His past is cloaked in secrecy, and he writes his future in the blood of the people he kills. After the Great Global War, he leaves the militias behind to prey on the scum that remain loyal to the cruel and tyrannical regime of the defeated enemy Omega in this dangerous and new post-apocalyptic world.

He calls it vengeance for what the war took from him.

When he uncovers a plot that could bring death to the only person he’s ever loved, he’ll do anything to stop it.

The only problem? He may already be too late.

A thrilling novel from #1 bestselling author Summer Lane, creator of the smash-hit Collapse Series, Zero Trilogy, Bravo Saga, Unbreakable Seal, and the historical romantic thriller, Running with Wolves. Vigilante is a novel that stands alone, and is set within the Collapse Universe.

I am organizing a release week blitz for Vigilante by Summer Lane, a New Adult Post-apocalyptic/Romantic Thriller novel. The blitz will run from December 15th to December 17th, 2017, you can post on any day during this window. There will be excerpts available for your post, and every participant will be able to post the blitz-wide giveaway if you wish – giveaway prize(s) courtesy of publisher. Social media sites are welcome.

An email with the complete post info including promo items and giveaway details will be sent to all participants on December 12th.
HTML will also be provided.