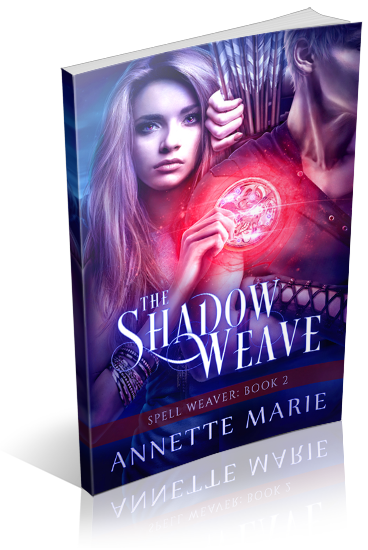 Clio might be a nymph living in exile among humans. And she might possess the rare ability to mimic any magic she sees. And she might have just seriously ticked off the most powerful family of spell weavers in the Underworld.

But she is not in love with an incubus.

Lyre is the rebellious black sheep of said weaver family, and he’s the only reason she survived her recent Underworld “vacation.” He’s also the sexiest thing she’s ever seen. Together, they have to track down a catastrophically dangerous magic—a magic he created, she sort of stole, and they both lost—before his family gets their hands on it. And that means fighting alongside him in a desperate attempt to avert complete disaster.

But she is definitely not in love with him. At least, she’s pretty sure she’s not.

Mostly sure.
Maybe sure?
…Crap.

—
The Spell Weaver Trilogy:
The Night Realm
The Shadow Weave

I am organizing a release week blitz for The Shadow Weave by Annette Marie, an Adult Urban Fantasy novel. The blitz will run from January 15th to January 19th, 2018, you can post on any day during this window. There will be excerpts available for your post, and every participant will be able to post the blitz-wide giveaway if you wish – giveaway prize(s) courtesy of author. Social media sites are welcome.