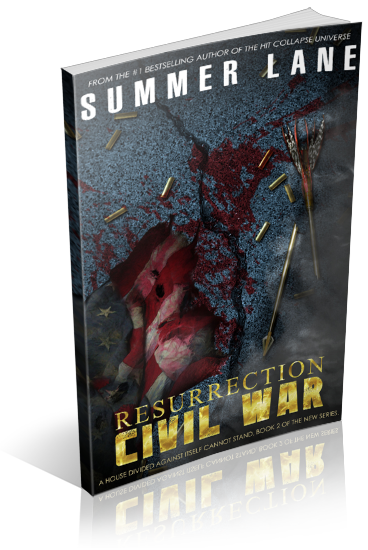 JUNE 15, 2018 – THE SECOND INSTALLMENT IN THE NEW SERIES!
CASSIDY HART’S PRESIDENCY IS IN TROUBLE.

A house divided against itself cannot stand.
As the Western Republic and the Eastern Coalition are thrust into the beginning of a civil war, President Cassidy Hart fears for the survival of the country that she has worked so hard to protect.
A new, dangerous Omega Chancellor has taken control of the Eastern Coalition, heading up a new division of technological warfare, in an attempt to crush the Freedom Fighters and the entire structure of leadership built around Cassidy’s presidency.
While a new type of advanced warfare begins, Cassidy and her team penetrate the dangerous underbelly of Omega’s remaining secret societies to get closer to the Chancellor and to seize Omega technology…before it’s too late to save the Western Republic.
Torn between loyalty, duty, and love, Cassidy Hart will go down in history as either the most beloved – or most hated – president of all time.
This means war.

From the bestselling author of 20 hit novels, including the popular Collapse Series, Summer Lane. This novel continues the adventures of the Resurrection Series and beloved heroine, Cassidy Hart.

I am organizing a release blitz for Resurrection: Civil War by Summer Lane, a New Adult Dystopian novel. The blitz will run from June 15th to June 17th, 2018, you can post on any day during this window. There will be excerpts available for your post, and every participant will be able to post the blitz-wide giveaway if you wish – giveaway prize(s) courtesy of author. Social media sites are welcome.

An email with the complete post info including promo items and giveaway details will be sent to all participants on June 12th.
HTML will also be provided.