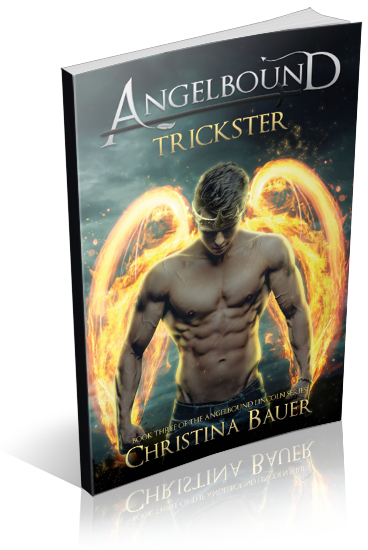 ***A hilarious adventure after the events of Angelbound SCALA … and it’s all from Prince Lincoln’s point of view!!!***

With the drama of the Soul Towers and Lucifer’s Orb behind them, Myla and Lincoln look forward to sharing some quality time. Perhaps they’ll even do a ‘regular couple thingie’ like a dinner date. Or they could kill more demons together. Myla isn’t picky.

Then a trickster gets released inside Antrum’s secure borders. And by trickster, we’re talking a giant orange monkey with magical powers and a love of causing drama with uptight thrax.

Christina Bauer thinks that fantasy books are like bacon: they just make life better. All of which is why she writes romance novels that feature demons, dragons, wizards, witches, elves, elementals, and a bunch of random stuff that she brainstorms while riding the Boston T. Oh, and she includes lots of humor and kick-ass chicks, too. Christina graduated from Syracuse University’s Newhouse School with BA’s in English along with Television, Radio, and Film Production. She lives in Newton, MA with her husband, son, and semi-insane golden retriever, Ruby.Be the first to know about new releases from Christina by signing up for her newsletter: http://tinyurl.com/CBupdatesStalk Christina On Social Media – She Loves It!