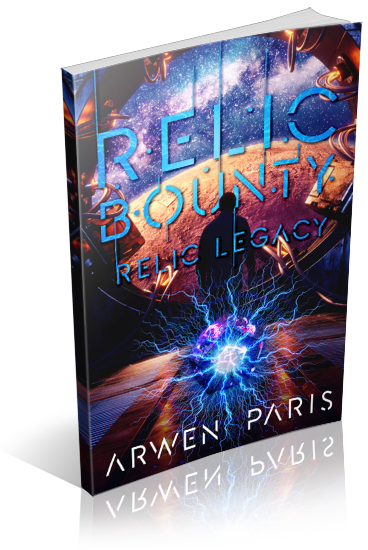 Kill the courier, retrieve the relic, collect the money.

Bounty hunter Janis Torzen finally has a chance to free himself from his indentured servitude to the mob. The brutal weather on planet Urrak is as unforgiving as the mob boss Janis Torzen works for, so of course a sudden sandstorm upsets his best laid plans. To make things worse, the courier, Everell, turns out to be a beautiful, smart-mouthed archeologist who has her own plans for the money. Unfortunately, powerful people will kill to possess the relic Everell carries—everyone from government officials to the social elite, and they will stop at nothing to get it.

Now on the run, Janis and Everell are forced to depend on each other to escape from Nadir Space Port. But when Everell and the relic are stolen from Janis, he must go back to the very man he’s trying to get away from and offer a deal with the devil. He’s got nothing to lose but his own life, so he bluffs the mob, willing to sacrifice his future to save the woman he’s fallen in love with—a woman he’s still not sure he can trust.

It’s a crazy plan, one so crazy it just might work. If he succeeds, it will pay out big for his wallet and his heart—if he doesn’t die trying. But with a bounty this high, it’s worth any risk…

I am organizing a release week blitz for Relic Bounty by Arwen Paris, an Adult Sci-Fi Adventure Romance novel. The blitz will run from December 30th to January 3rd, you can post on any day during this window. There will be excerpts available for your post, and every participant will be able to post the blitz-wide giveaway if you wish – giveaway prize courtesy of author. Social media sites are welcome. ARCs are also available for blitz participants.

An email with the complete post info including promo items and giveaway details will be sent to all participants on December 28th.
HTML will also be provided.