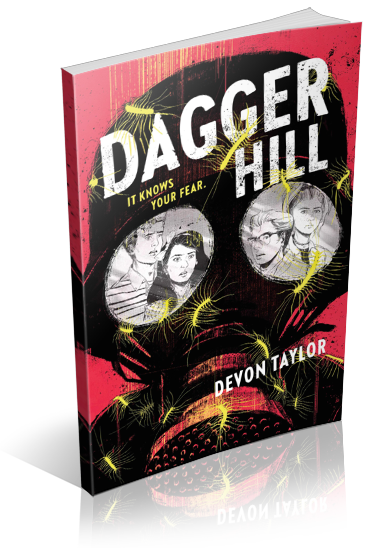 Stranger Things meets One of Us Is Lying in this creepy paranormal mystery about four friends who find themselves hunted by a malevolent presence in their sleepy hometown.

It knows your fear…

Summer, 1989. Four best friends—Gabe, Kimberly, Charlie, and Sonya—are preparing for their last summer together before senior year, after which they’ll all be splitting up to start college in different parts of the country. They make a promise to always find their way back to each other, no matter how far away from their sleepy Pennsylvania hometown they get.

In the catastrophic aftermath of the incident, Gabe, Sonya and Charlie are plagued by eerie visions and messages from an unknown watcher. They soon realize that the plane crash was no accident, and now they are being hunted by a sinister presence. And everyone is still searching for Kimberly, who has been missing ever since Gabe saw somebody wearing a gas mask carry her out of the woods the day the sky fell down on them…

Devon Taylor was born in Las Vegas, Nevada and currently lives in Pennsylvania with his wife and two daughters. His day job consists of sneaking around the house with ninja-like stealth to avoid waking up his kids. When not writing, reading, or tediously typing out text messages with all the correct spelling and punctuation, he spends his time with his family. THE SOUL KEEPERS is his debut novel.

I’m organizing a blog tour for Dagger Hill by Devon Taylor, a YA Paranormal Mystery novel. There are 20 spots on this tour which will run from August 16th to August 20th, 2021. Posts will consist of reviews, guest posts, interviews, and excerpts. There will also be a tour giveaway. Review copies will be available in ebook formats.

Note that signing up does not guarantee a spot on the tour.
Those selected for the tour will be emailed in early July with their tour date.
The tour schedule will also be posted on this page.