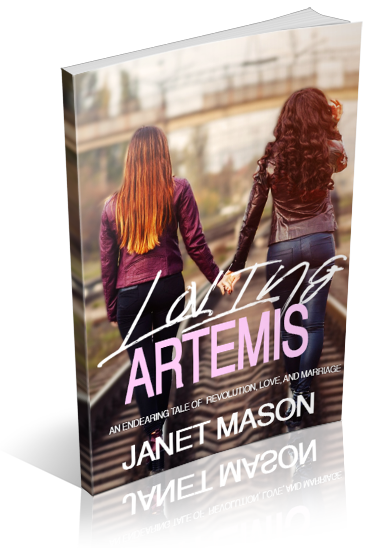 Artemis found the love of her life when she met Linda, but their passionate relationship fizzles when Artemis lands herself on the other side of the law. Pulling the pieces of her life together, Artemis rekindles her relationship with Linda, and together they raise a daughter.Meanwhile, Grace, running from her past, starts a life with Thalia. At a pride parade, Grace spots someone who reminds her of Artemis, who she was briefly involved with in her youth. Old feelings are rekindled. A lifetime of rejection, abandonment, and fleeing rears its head. Now she must come to terms with her past, put her relationship with Artemis to rest–or risk losing everything.Artemis and Grace embark on a journey of revolution, love, and marriage and discover that love finds us when we least expect it.——————-Janet Mason is an award-winning creative writer, teacher, marketing professional, and occasional blogger for such places as The Huffington Post. Their book, Tea Leaves, a memoir of mothers and daughters, published by Bella Books in 2012, was chosen by the American Library Association for its 2013 Over the Rainbow List. Tea Leaves also received a Goldie Award. Their work has been nominated for a Pushcart Prize, and their novel THEY, a biblical tale of secret genders (Adelaide Books – New York and Lisbon) was featured at the 2018 Frankfurt Book Fair. Adelaide Books also published their novel The Unicorn, The Mystery late in 2020.Loving Artemis appeals to a wide readership, with particular interest to the LGBTQA+ audience. As a love story and a coming-of-age narrative, it holds universal appeal. It is also an important slice of American history — enticing to those who have lived through it. It also attracts a younger audience who want to learn about the events that led to marriage equality.

I’m organizing a release week blitz for Loving Artemis by Janet Mason, a lesbian romance/coming of age fiction. The blitz will run from August 16th to August 23rd, 2022, you can post on any day during this window. There will be excerpts available for your post, and every participant will be able to post the blitz-wide giveaway if you wish – giveaway prize(s) courtesy of author. Social media sites are welcome.