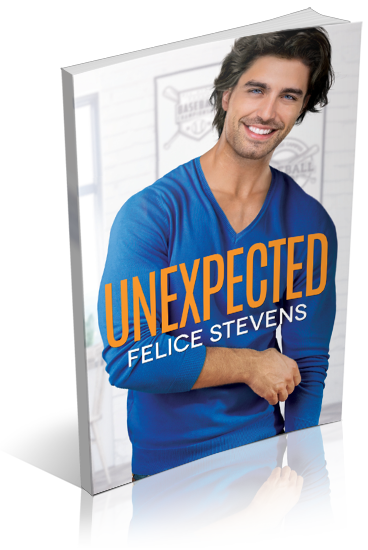 Party planner Colin Brightman doesn’t drink or dance, preferring to go to bed early with his spreadsheets and lists. All he wants is to forget the singles weekend his friends sent him on, but he’s stuck with a suitcase filled with condoms and skimpy Speedos that don’t belong to him.

He doesn’t expect his luggage thief to be ex-baseball superstar Walker “Walk-Off” Scanlon. Or that Walker has hired his firm to put on a charity event at his bar. Colin can’t deny the mixed emotions the annoyingly flirty man stirs in him, but he refuses to fall for someone who racks up lovers as easily as he once hit home runs.
No matter how much he might want to.

Walker Scanlon likes his men easygoing with no complications. He’s had enough of those in his life. So why is he drawn to tense and straitlaced Colin and his frosty scowl?When even his corny one-liners and jokes don’t get him a smile? Because the sparks between them are undeniable. And that unexpected kiss? Amazin’.

Now if only Colin would stop running away.

When Colin and Walker come face to face with past hurts and betrayals, they’ll need to trust themselves and each other to learn that heartbreak and love don’t go hand in hand. It’s the bottom of the ninth and if they swing for the stars, they just might hit the grand slam of a lifetime.

Unexpected is a low-angst, high-heat romance between a corny joke-telling ex-baseball player who doesn’t believe in striking out on or off the field and a divorced, tea-drinking homebody who isn’t willing to get played…again.

I’m organizing a release blitz for Unexpected by Felice Stevens, an Adult Sports Romance novel. The blitz will run from June 30th to July 4th, 2022, you can post on any day during this window. There will be excerpts available for your post, and every participant will be able to post the blitz-wide giveaway if you wish – giveaway prize(s) courtesy of author. Social media sites are welcome.

An email with the complete post info including promo items and giveaway details will be sent to all participants on June 27th.
HTML will also be provided.